Bulletin of problems biology and medicine / Issue 3 part 2 (111), 2014 / The Effect of the Grinded Substrate of the Preserved Pig Skin on the Manifestations of Experimental Allergic Dermatitis
Pyatnytsky Yu. S., Bondarenko Yu. I., Denefil O. V.

The objective of the scientific paper is to study the efficacy of the use of cryopreserved xenogenic skin components for nonspecific (paraspecific) hyposensibilisation in experimental allergic dermatitis. Experimental allergic contact dermatitis as a model of delayed response was simulated on 40 sexually mature guinea pigs (350­400 g body weight). Allergic dermatitis was induced by rubbing­in 5 % alcohol­acetone solution of 2,4­ dinitrochlorbenzene. The animals had been previously sensibilised. Sensibilisation was focused on the limited dorsum area (9 cm2), the pelage being pre­removed. 2,4­ dinitrochlorbenzene was rubbed in once a day. The critical dose was applied on the 21st day. The degree of dermatitis manifestation was judged by the animals’ general condition and habit. Skin changes were controlled on the 1st, 3rd, and 5th day after allergen serial applications. Severity of local inflammatory lesions was expressed in standard units (points): 0 – lack of response; 0.5 – emergence of isolated red patches; 1­ diffuse moderate hyperaemia; 2 – well­delineated oedematous hyperaemia; 3 – severe oedematous hyperaemia; 4 – erosive formations; and 5 – formations of hemorrhagic crusts and large ulcers. The thickness of the skin fold served as additional criteria of dermatitis formation. Experiments were carried out on 2 groups of animals, 2 other groups being used as control ones: Group 1 – intact animals (control Group 1); Group 2 – animals exposed to 5 times’ 2,4­ dinitrochlorbenzene applications, no treatment (control Group 2); Group 3 – animals with 5 times’ 2,4­ dinitrochlorbenzene applications, each of them followed by 30 mg/kg of enteral substrate twice a day for 30 days (basic, experimental Group 1); Group 4 – animals with 5 times’ 2,4­ dinitrochlorbenzene applications. 100 mg/kg of the substrate of the cryoliophylized pig grinded skin was injected only after 2,4­ dinitrochlorbenzene critical dose twice a day for 9 days (experimental Group 2). Pharmacologic efficacy of the grinded substrate of the cryoliophylized pig skin was determined by the intensity of anti­allergic, anti­inflammatory (wound healing) and membrane protective effect. The intensity of allergic inflammation was estimated on the 7th, 14th, and 21st day. Experiments were carried out in compliance with the regulations of European Convention for the Protection of Vertebrate Animals used for Experimental and Other Scientific Purposes (Strasbourg, 1986). The animals were kept according to active regulations. Digital data were statistically processed with “Excel” (“Microsoft, USA) and “STATISTICA” 6. 0 (“Statsoft”, USA) using parametric and non­parametric methods of data evaluation. A day after single superficial application of 2,4­ dinitrochlorbenzene solution the animals of control Group 2 showed moderate hyperaemia (1­1. 3 points) and partially oedema. Every other application was associated with growing manifestations of dermatitis, the peak of them, with haemorrhagic crests formation, being noted on the 4th­5th day (4­5 points). The skin fold also thickened considerably during the experiment. Beginning from the 3rd experimental day, the substrate of the grinded xenoskin was found to possess hyposensibilisative properties positively affecting the course of contact dermatitis. On the 7th day, the crust came off showing normal coetaneous covering. The thickness of the skin fold was decreasing reliably in both experimental groups. In contact dermatitis, xenodermal substrate promptly revealed membrane protective effect showing the rise of both erythrocytes and leukocytes resistance index on the 7th, 14th, and 21st day. Thus, enteral introduction of grinded substrate of the preserved pig skin improves coetaneous covering and increases the resistance the blood cells’ membranes. 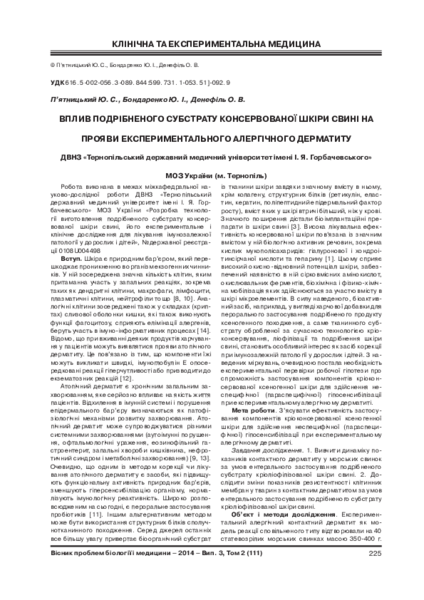