Hyperandrogenism – pathological condition of the organism, caused by the excess production or impaired metabolism of androgens. The prevalence of this disease is high and is in the population, according to dif­ ferent authors, 30 %, and largely lead to the development of complications of pregnancy. Pregnancy is an optional starting point, which increases the clinical expression violations steroid genesis in patients with hyperandrogenism. Excessive amount of androgens during pregnancy leads to stasis and sclerotic changes in the microvasculature, increased fragility of vessels of miometrium and placenta, that adversely affect the uterine­placental circulation and in turn leads to the disruption of the functioning of fetal­placental system. Morphological changes of the placenta, as a basis of development of placental insufficiency in hyperandrogenism is not enough covered in the literature and require further study. The paper is devoted to the study of macro­ microscopic, morphological changes of placentas obtained during labor in women with various forms of domination and androgens during gestation complicated by placental insufficiency on the background of hyperandrogenism. In the process, we surveyed 50 pregnant women with hyperandrogenism aged 18 to 45 years. Biochemical markers for diagnosis of hyperandrogenism was the urine level of 17 – ketosteroids, the level of DHEA sulfate and testosterone in the serum, which was determined by enzyme immunoassay. Assessment of fetoplacental complex was performed using ultrasonic placentometry, doplerometry of uterine blood flow and circulation in the vessels of the umbilical cord, fetal part of the placenta. The status of the fetus was evaluated by the application of the cardiotocography. By indications was treated threat of termination of pregnancy, when signs of placental insufficiency were intended courses of metabolic therapy. Dexamethasone was designed in standard dose (0,125­0,25 mg / day) after finding hyperandrogenism to gestation 35­36 weeks. Morfometry research placenta was carried out according to the methodological recommendations on the stan­ dardization of methods of morphometry of the placenta. The study revealed that the early development of pla­ cental insufficiency with hemodynamic violations of in the system mother­placenta­fetus is typical for women with hyperandrogenism. Placental insufficiency in most cases is the primary and due to premature failure of the blood supply of mio­ metrium and the basal part of the endometrial, the defective development of the vascular system of the placenta and the uterine – placental vascular vessels, all contributing to the violation of the utero­placental circulation and promotes the exception of the blood separate areas of the placenta. The pathological conditions of the emergence of multiple syncytial processes are often the result of a compensatory hyperplastic changes chorionic epithelium, which is characteristic of chronic placental insufficiency. There was also the increase intravelosus space, or fetal, fibrinoid in patients with the dominance of androgens. Physical examination of the placenta identified individual sites of hemorrhage on the maternal surface, small, diffuse areas of necrosis. The discrepancy between the mass of the placenta and gestating norm more than just caused not adequate functioning of vessels uterine­placental system that does not effective implementation of compensatory­adaptive reactions of the placenta. While the chorionic villi have no conditions to express hyperplas­ tic reactions, and therefore the weight of the placenta often lags behind from the normal values. In addition to compensatory – adaptive responses in the placenta detecting pathological changes such as reducing the amount of intervillous space, excessive deposition of maternal and fetal fibrinoid, significant pockets of heart attacks, and cysts that exceed those standards. More pronounced changes were found in the absence of pharmacological therapy of hyperandrogenism. 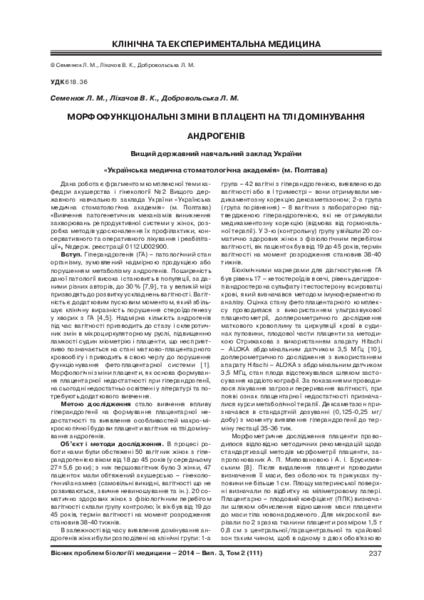