The purpose of the research is to study epigenetic risk factors for developing influenza and obstetric and perinatal complications during the epidemic season of 2009-2010. 300 pregnant women have been examined and organized into groups. In the majority of cases the examined women were residents from central geographical zone of Odessa region. 241(80,3 %) pregnant women lived in Odessa, and 59(19,7 %) women lived in districts of the region. It has been found out that 123(41,0 %) women, starting from the time when Chernobyl disaster had happened (1996), were at the pre- pubescent and pubescent age. 249(83,1 %) women, i. e., 24(80,0 %) individuals in Group A, 11(82,2 %) individuals in Group B and 114(84,4 %) individuals in Group C, were at the age of the highest repro- ductive activity (20-29 years old). The highest frequency of developing acute respiratory viral infection (ARVI) and influenza (157(58,1 %)), as well as obstetric and perinatal complications both in past case history and during the study appears to be most common at the age of the highest reproductive activity. Part of examined pregnant women at younger and more senior age constituted 35(11,7 %) and 16(5,3 %), respectively. Consequently, group of preg- nant women at the age of the highest reproductive activity should be considered in the first place as a risk group for developing ARVI and influenza, as well as obstetric and perinatal complications. According to seasonal features, among 270 (100 %) of pregnant women from the main group and comparison group, 62 (23,0 %) women became pregnant in summer months, 75 (27,8 %) women became pregnant in autumn months, i. e., the first wave of epidemic season of 2009-2010. In 76 (28,1 %) cases fertilization was in winter, in 57(21,1 %) cases fertilization was in spring during the second wave of influenza in epidemic season of 2009-2010. Consequently, fertilization in autumn-winter and spring seasons is defined as risk factor for developing ARVI and influenza, as well as obstetric and perinatal complications. In 62,6 % of pregnant women an uncontrolled intake of various medications was registered. 63,0 % of examined women took hormonal drugs for hormonal contraception, to normalize thyroid gland function, 188(69,6 %) preg­ nant women received hormonal therapy (Dufaston®) from the first days of delay of menstruation, 54,1 % of them took antibiotics, 70,7 % – sulfonamides; in 36,7 % cases current pregnancy began against the background of intake of drugs to lose weight, in 31,9 % – various homeopathic medications that considerably affect metabolism. 42,6 % of all the examined women admitted lack of motion and 59,3 % of them were involved in physical fitness. Therefore, uncontrolled intake of medications and presence of bad habits, unbalanced and irregular meals, lack of motion (hypodynamia), affected the pregnant woman’s general state of health, are, in most cases, risk factors for developing ARVI and influenza, as well as obstetric and perinatal complications. Polymorphous variants (homozygous, heterozygous) of studied alleles of genes (combined polymorphism) are detected at an average of 122(90,6 %) women from the main group (оR – 1,5) and 135(100 %) women from com­ parison group. Thus, there are no undetermined causes of diseases, there is poorly odtained case history. Determination of fac­ tors for developing ARVI and influenza, as well as risk for developing obstetric and perinatal complications should be carried out from the position of epigenetics, grounded by the analysis of retrospective and perspective data and analysis of alleles of genes of enzyme of endothelial NO­ synthasein in the 4th (еNOS 3 4b/4a) intron, Type II COL2A1 (COL2A1 6846C/A) procollagen, рAI1 (раІ­1 PLANH1 675 5G/4G) fibrinolytic activity, system of antioxidant protec­ tion – superoxide dismutase (SOD1 7958 G/A). 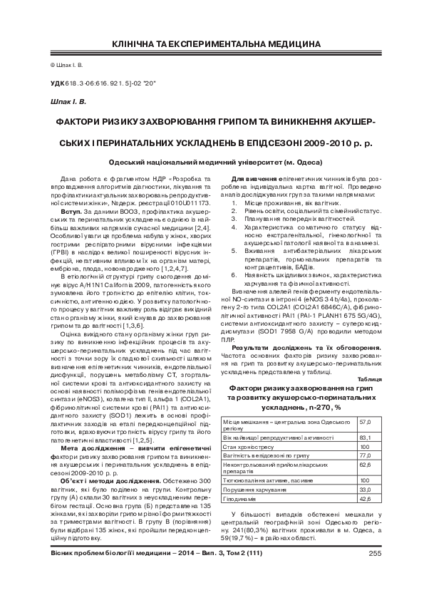