Uterine leiomyoma occupies a leading position in the structure of female reproductive system (SFRS) and occurs between 20 and 45 % of women of reproductive age. Trying to keep the reproductive organs (uterus) by using reproductive­plastic surgery (RPS) is observed only in 5­20 % of women and hysterectomy performed in almost 80­90 % of cases. Taking into account development of modern pharmacology, presently in gynecology there are more possibilities for conservative treatment of leiomyoma of uterus. But it is impossible to examine conservative therapy, especially hormonal, as alternative surgical treatment of leiomyoma of uterus. Development of functional surgery with improvement reconstructive plastic interferences. The aim of our work was to study the size, location and characteristics of blood supply to the myoma nodes in patients of reproductive age before performing the RPS by ultrasound. Criteria for selection of patients to achieve the goal were reproductive age women, the lack of ovarian tumors, endometrial pathology and a woman’s desire not only to preserve the uterus, but also the birth. Gynecological ultrasound apparatus using Medison ACCUVIX V10, using trans­abdominal sensor. We determined the size of the uterus, nodes, volume, their localization and flow. Research was conducted in 22 women of reproductive age who were examined and prepared for the RPS. Dimensions of uterus from 12 to 22­24 weeks of pregnancy, the size of nodes from 0.5 to 22 cm in diameter, cancer size was 864,98 ± 13,64 cm2, myoma size tissue in averaged 368,16 ± 36,78 cm3. It should be added that the fate of myoma tissue was represented by interstitial­interstitial and subserous nodes. Multiple leiomyomas of the uterus were observed in the majority of cases – 79.4 %, and individual nodes occurred in 20.6 %. Whereas, under the supervision of women were mainly from interstitial localization – units were predominantly hyperechoic structures are heterogeneous, suggesting the fibrous component of the tumor. Vascularization of interstitial, subserous nodes was vague: indicators MC 32,1 ± 1,86, and IR – 0,62 ± 0,03 and there was no blood flow in intramodulary, interstitial, subserous nodes. Estimation endometria were conducted determination of Mcode­ekho, and its thickness. The estimation of blood supply of myomatous knots and ovaries was conducted in the mode of power Doppler. This research was included by the study of blood supply, both for peripheral knot and in its structure. Vascularization considered expressed at presence of 10 and anymore world signals from vessels in myomatous knots. It mattered very much at the choice of place of cut of capsule of knot during his delete. Automatically after formulas settled accounts. Thus, in patients with interstitial and subserous, interstitial location of nodes in uterine leiomyoma, observed mainly fibrous structure with indistinct of vascualization, contributing less blood loss during the execution of the RPS, the possibility of reproductive organ and its function. 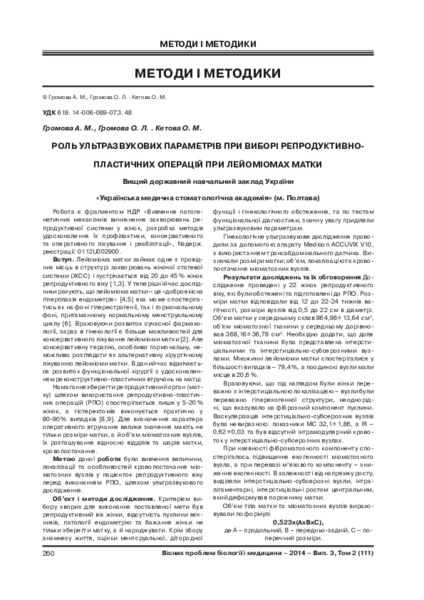