At present embryological studies found that in rats, as in other mammals, the urinary and genital systems develop from common embryonic germ. Later their topographical relationship were similarly changed. The kidneys occupy lumbar region situated behind the peritoneum on posterior abdominal wall, and the testes descend into the scrotum according that their common features and differences in blood supply are related, what ultimately can may effects on providing functional comfort of this organs. According to the laws of fluid dynamics, affect on the organ blood flow intensity may have vessels geometrical parameters. In particular, this may relate to their length­ diametric ratios. Objective: to learn the spatial and morphometric features of the big kidneys and gonads vessels of male rats and their correlation with functioning features of these organs and give them a comparative description. Experiments carried out on 12 mature male rats weighing 180­200 g, the assessment of the spatial organization of kidneys and gonads blood vessels performed on postmortem contrast X­ray picture. We determined the volume of the studied organs. Calculation of the pressure difference at the beginning and end of the vessel was made according to Poiseuille law. Gonads or testes in male rats are paired organs, located in the scrotum. In mature 180­200 g rats their volume is average (943,58 ± 24,09) mmі. Blood supply of the testes provides mainly by testicular arteries, branch from the abdominal aorta immediately below the orifice of renal arteries. Testicular artery diameter at the orifice is from 0. 25 to 0.35 mm (mean (0,30 ± 0,02) mm) and almost unchanged up its entrance to the tunica albuginea. The length of these arteries ranges from 84 to 91 mm (mean (87,83 ± 0,98) mm). In mature male 180­200 g rats kidney volume average 494. 24 mmі. Blood supply provides mainly through the renal arteries the branch from the abdominal aorta. The length of the right renal artery from aorta to the organ parenchyma entrence reaches (8,25 ± 0,09) mm, left – (5,72 ± 0,12) mm and the diameter average (0,53 ± 0,07) mm. Mathematical calculations revealed differences in the intensity of blood flow between right and left kidney, and between the kidneys and testes. Primarily, we found the relation between cross­sectional area of the renal and testicular arteries, which was 3.12. Therefore, for testicular artery was conventionally accept Qt = 1, the same indicator for renal artery was Qk = 3.12. Further calculations gave the following results. Pressure drop in the right renal artery was 53.19 and in left – 36.88 arbitrary units. Its mean that the left kidney has more intense blood flow compared to the right, as the pressure drop in her big arteries at 1. 44 times smaller than the right. Thus pressure drop in the testicular artery was 2242. 25 arbitrary units or pressure drop it in 42.15 times bigger than in the right kidney and 60.80 times higher than in the left one. Comparing the obtained results and comparing the intensity of rat’s kidneys and testes blood flow in norm we can stated follows. If the volume of male rats testis in practically 2 times (1.91 times) bigger than the volume of the kidney, the artery that supplies blood to it, almost in 2 times (1.77 times) has less diameter of the lumen, which together with its much bigger length (at 10.65 times higher compared to the right renal artery, and 15.35 times more than in the left kidney) contributes to a significant reduction of volume and linear speed of blood flow by increasing the pressure difference in the initial and final vessel sections, which is consistent with the Poiseuille law. The peculiarities of morphometric parameters and their correlations may reflect the intensity of blood flow in various organs and can be relevant to maintain testes proper temperature mode that is required for their normal spermatogenesis [12, 13, 14]. One of evidence that shows the testicle blood flow slowing is expressed its arterial and venous parts hyperemia that systematically detected by histological examination. 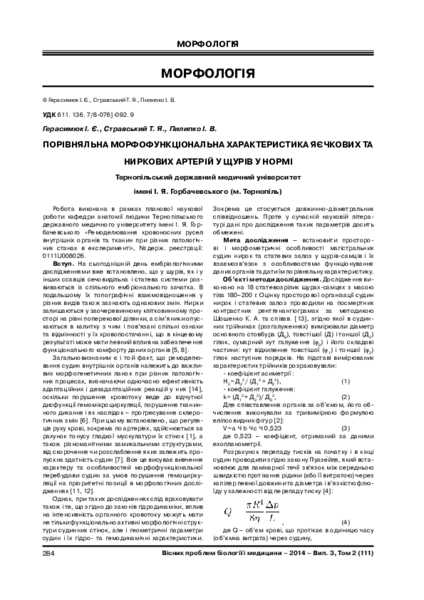