Bulletin of problems biology and medicine / Issue 3 part 2 (111), 2014 / Effect of Hyperosmolar Solutions on Microcirculation in the Adrenal Cortex in Thermal Burns in Rats
Dzevulska I. V., Malikov A. V., Titarenko V. N.

The structural and functional zones of adrenal in the cortical substation are histologically divided. The endocrinocytes of these areas synthesize functionally different hormones: the ball zone – mineralocorticoids (aldosterone); the beam zone – glucorticosteroids (cortisol, corticosterone); the net zone – steroid hormones (an­ drogens, estrogens, progesterone). Mineralocorticoids take part in the regulation of the electrolyte metabolism, and to some extent – in the regula­ tion of water metabolism. Aldosterone the reabsorbtion of iones of sodium in kidneys, saliva glands, gastrointes­ tinal tract, in other words, it delays the iones of sodium in the organism. Aldosterone changes the permeability of all membranes for iones of sodium and potassium; it compounds processes of inflammation and synthesis of the estrogen. The concentration of sodium and potassium iones in the plasma of blood, angiotensin II regulates the secretion of aldosterone by endocrinocytes. The increase of concentration of sodium iones and the reduction of potassium iones, the reduction of volume of blood plasma lead to compounding of aldosterone secretion. The similar effects sires an angiotensin II, that is synthesized from the angiotensin I under the influence of renin hormone (its synthe­ sized by juxtaglomerular all of kidney). Glucorticosteroids strongly and differently influence the metabolism processes in the human organism, com­ pound the catabolism processes in protein metabolism and stimulate glucoses (it leads to increase of the level of glucose in blood and the level of glycogen in liver, skeletal muscles and myocardium). Glucorticosteroids regulate lypides, normalize excretion of water from organism, compacted ball filtering and reduce water reabsorbtion in distal winding tubules of kidney. Antiinflammatory influence of glucorticosteroids is widely used in medical practice. Introduction of glucortizone causes involution of the immune system, bright immunosuppression connected with the distruction of lymphoid tissue. Glucorticoids selectivery brake the synthesis of main substation of connective tissue and proliferation of fibro­ blasts, reduce the number of fabric basophils, block the enzyme hyaluronidase effect, so they reduce the capilar permeability. Stress – factors cause the glucorticoids secretion increase, even to the total depletion of endocrino­ cytes of the cortical substation of adrenals. Secretion of glucorticosteroids by the endocrinocytes of the cortical substation of adrenals. Secretion of glucorticosteroids by the endocrinocytes of beam zone and partly of net zone is regulated by corticotropin (adrenocorticotrop hormone – ACTH), wich is secreted by adenohypophysis. This paper describes a comparative analysis of the effect of hyperosmolar infusion solutions on microcircula­ tion changes of the adrenal cortex in rats after burn. On the basis of histological, ultrastructural and morphometric methods revealed that course administration during burn shock lactoprotein с and HAES significantly reduces the blood supply and blood capillary stasis of the adrenal glands, which reduces the degenerative changes in the pa­ renchyma of the gland. Pronounced pharmacological effect of complex hyperosmolar drugs due to their effect on blood rheological, which have a positive effect on the microcirculation. Comparative analysis of morphological changes in rats adrenal glands after burn and injection of hyperosmolar solutions of lactoprotein C and HAES has showed the reduction of dystrophix lisions of microcirculatory channel and glands adenocorticocytes. Sinusoidal hemocapillars of the experimental group have had lignificant blood filling, that is a manifestation of systemic organisms reaction on burn injury and hypervolemia. The most blood was noted in hemocapillars of adrenal glands reticular zone and has phasic flow. The cross sufional area of experimental rats hemocapillars has it change on third day often injuction of experimental drugs in comparison with the contral group of animals. The use of hyperosmolar infusions solutions of lactoprotein C and HAES has a positive influence on recovery processes of adrenal glands cortex after local termical burns of skin. After the thermical damage the level of intermediary metabolites and products of damaged tissues necrosis increases abruptly in circulating blood and cousing of rheological properties of blood and functioning of microcirculatory channel. The use studied drugs during acute period of burn injury recovers microcirculation that influenced positively by reduction of dystrophical changes after burn shock. In our opinion the pharmacological effect of lactoprotein (and especially HAES is connected with their influence on bloods rheological parameters, but that statement reguires the appropriate scientific research. 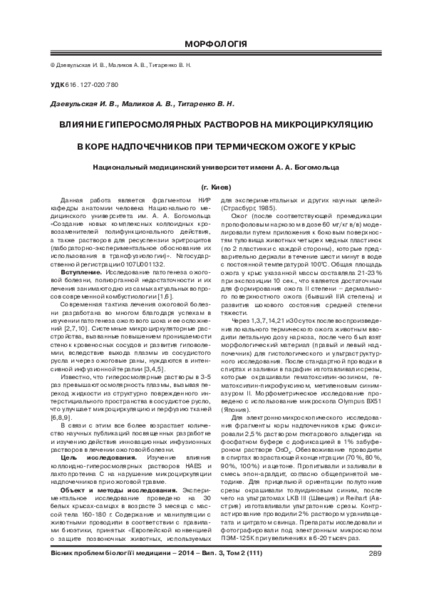