In modern life trauma is one of the three leading causes of mortality with cardiovascular and onco­ logical diseases. Proportion of deaths in working age reached 27 %, with the majority (80 %) of male individuals. The problem of recovery after bone injury is caused by one of the oldest in medicine, and in spite of its long history, is far from being solved to date and in need of new methods of optimization, which is relevant in the practice of medi­ cine. Disorders of water­ electrolyte metabolism – a very common pathology in critically ill. Emerging with disorders of water content in the different environments of the body and the related changes in the content of electrolytes and acid alkaline status set the stage for the emergence of dangerous disorders of vital functions and metabolism. The main biomechanical properties of the skeletal system as solids, is the strength and resilience. Over the years, the mechanical properties of bone tissue and the mechanisms underlying their changes in various diseases, are of considerable scientific and medical interest. Knowledge of these mechanisms allows more processes to delve into the pathogenesis of diseases of the musculoskeletal system of humans, which opens new perspectives in the prevention and treatment of this pathology of bone. The experiment was performed on white laboratory rats – males young, mature and old age, which was ap­ plied perforated fracture of the tibia in a general dehydration of various degrees. After the end of their studies were performed in rats decapitation under anesthesia for 24 days, after which the test animals confiscated injured tibia to further study its strength properties at break and compression. For this purpose, a special device was used, which gave an opportunity to determine the longitudinal strength of bone by means of the action of external force. The aim of the study was to investigate the strength properties of the injured bones of young, mature and old animals of the experimental group. The experiment revealed quantitative changes and conducted comparative characteristics among all groups of animals. The greatest changes were found in the group of elderly animals, and the lowest – in mature rats. The regularities of changes in the strength properties of the injured tibia depending on the degree of water – electrolyte imbalance. These are the results of a study in which even at mild dehydration limit of tensile strength and Young’s modulus most of all falling in the elderly group of animals to 7,21 % (p 0,05) and 10,98 % (p 0,05). In medium or severe dehydration turns general further predicted deterioration in elderly rats, manifested in the largest decrease among all age groups strength characteristics of the injured tibia (yield tensile strength at 16,17 % (p 0,05) and 26,89 % (p 0,05), the tensile strength in compression to 11,09 % (p 0,05) and 17,85 % (p 0,05), Young’s modulus to 21,81 % (p 0,05) and 34,88 % (p 0,05), respectively). Each subsequent level of dehydration strength properties of bone predictably worse. Reduction of tensile strength in compression reflects the disturbance of mineralization of bone tissue. The data obtained during the experimental study indicate a significant effect of different degrees of dehydra­ tion іn general strength properties of the injured bone. Moreover, the pattern is traced, the heavier the degree of dehydration change, the strength ratios worse. It is known that bone consists of hydroxyapatite crystals (small, medium and large) and with age, there is a critical increase in large crystals of hydroxyapatite, which makes bones more brittle. Breaking strength characteristics of bone in animal elderly is associated with a critical accumulation of large crystals of hydroxyapatite, followed by an increase in bone fragility and the impact of stressors in violation of restoring bone. Therefore, given the age characteristics of bone determined that the most resistant to the effects of dehydration appeared to mature animals, and the most maladjusted – senile rats. 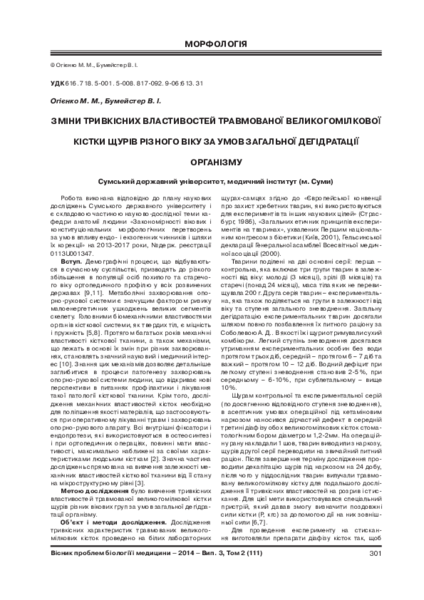