Reactive Changes in the Prostate Gland in Response to Cold Factor

The aim of the study was to establish morphofunctional peculiarities of the structural components of the prostate gland alteration at the height of the exposure to cold. The experiment was performed on 20 white outbred mature male rats. Condition of the general deep hypothermia was achieved at the decrease of rectal temperature to +12­+13˚C in a cold chamber. Euthanasia was performed by an overdosage of ether anesthesia. Thin injection of blood vessels with Parisian blue, hematoxylin and eosin, fuxelin­pikrofuxin, toluidine blue staining, electronic­microscopic methods were applied. During the study of the prostate gland blood arteries at different levels of branching the alternation of the ar­ terial narrowing with relatively dilated areas was revealed; it causes their uneven filling with the injection mass. Regarding venous bed, veins accompanying arteries of the same name, are well­filled with Parisian blue all over. In preparations, stained with fuxelin­pikrofuxin, the uniform tortuosity of the internal elastic membrane is impaired in arteries and arterioles of the ventral, dorsal lobes and coagulated glands. Thus, it forms folds of different height, on the apex of which there are swollen endothelial cells nuclei. Smooth myocytes of medial membrane are located in the recesses between the folds of the internal elastic membrane. Their nuclei are weakly contoured. The external elastic membrane is also irregularly tortuous. Connective tissue elements are located outside. A decrease of very dark and dark mast cells, with a corresponding increase of the light ones, and, slight increase of very light ones, which is especially pronounced in the vascular surrounding, are observed. Ultrastructurally – there is the disorder of the integrity of their membrane and outlet of granules outside the cells. There are also mast cells with intracellular granulolysis. In such cells plasmolemma is not damaged. Nuclei are well contoured. Granules are few in the cytoplasm, but there are many of vacuoles. At this stage of the study the enhanced relief of the walls of the terminal departments and glandular ducts is observed in all prostate lobes; they take a variety of forms. Musculo­elastic stroma, in the surrounding of which they are located, is swollen. Lumen of the glands is free from secretion and only in the lumen of some of them there are pink homogeneous masses. Cytoplasm of glandular epithelium cells is pale pink and fine­grained. Basophilic nuclei are concentrated at the basal cell surface. At the ultrastructural level invaginated nuclei of secretory cells are pulled out in the apical­basal direction. Chromatin granules in the nucleoplasm occupy a marginal position. Golgi apparatus is represented by a large number of vesicles and vacuoles. Agranular and granular endoplasmic reticulum is composed of dilated ducts and cisterns, on the membranes of which there is a small quantity of ribosomes. Mitochondria are with matrix of medial electronic density, cristae are poorly contoured. A few electronically dense granules are scattered in the cytoplasm. At the apical surface there are multiple short microvilli. The nuclei of the basal cells are rounded, with small protrusions and dents of nucleolemma. Chromatin is localized mainly under the nuclear membrane. Tubules and cisterns of granular endoplasmic reticulum are dilated, ribosomes are on the their outer membrane. There are individual elements of the Golgi apparatus. Mitochondria are with homogeneous matrix. Basal membrane is dilated, its contours are slightly blurred. Thus, at the height of the action of general deep hypothermia in all lobes of prostate gland some similar changes occur: clearly expressed edematic phenomena in the structural components of the arterial walls of all sizes, which leads to narrowing of the arterial vascular bed lumen, while veins undergo dilatation; mast cells degranulation index increases and, as a result, in the cells of glandular epithelium dystrophic processes develop. 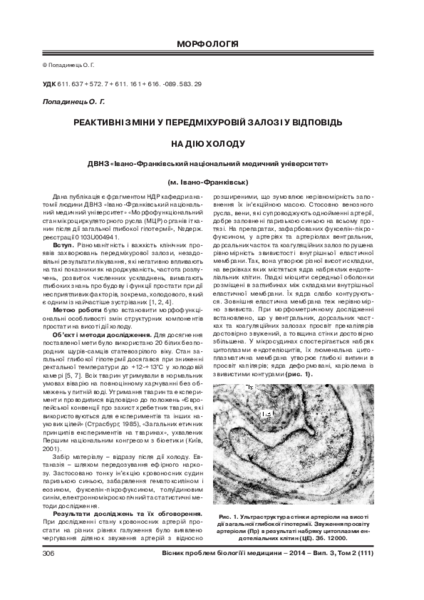