Bulletin of problems biology and medicine / Issue 3 part 2 (111), 2014 / Biochemical Indices of Blood Serum and Gomogenates of Gums for Rats at the Experimental Gingivitis, Caused by the Combined Action of Heavy Metals and Deficit of Fluorine and Iodine
Bezvuchko E. V., Malko N. V.


Biochemical Indices of Blood Serum and Gomogenates of Gums for Rats at the Experimental Gingivitis, Caused by the Combined Action of Heavy Metals and Deficit of Fluorine and Iodine

The inflammatory periodontal diseases are the issue of the day of not only dentistry, but also medicine on the whole, in connection with their high prevalence and negative influence on the body and stipulate economic consequences are certain. For the last 10 years, the charges of the state on the grant of dental help to the children of Ukraine increased more than 2. 5 times, that testifies to insufficient efficiency of prevention of basic dental morbidity for children. The aim of our research was to study of biochemical indices of blood serum and gomogenates of gums for experimental animals at gingivitis under the influence of the combined action of heavy metals and deficit of iodine and fluorine. Materials and research methods. Experimental gingivitis for rats was designed by transferring of animals in age 30 ± 5 twenty­four hours on the model of peroxide of gingivitis, with adding to the ordinary ration of peroxidation sunflower­seed oil in a dose 1 ml on an animal during 3th weeks. Just experiment were used 80 rats of line Vistar of the gregarious breeding, middle mass of which is 54 ± 5 g, females and males equally. In dependence on the design of anthropogenic conditions of environment, animals were divided into four groups: I group (control) is 20 intact rats that were contained on the ordinary diet of vivarium; II group is 20 animals, with the designed gingivitis; III group is 20 rats – model of peroxide of gingivitis, with adding to water of salts of heavy metals taking into account their molecular mass (CdCl2 = 0,010 mg/l; Pb (NO3) 2 = 0,36 mg/l); IV group is 20 rats – model of peroxide of gingivitis + salt of heavy metals + deficit of iodine + deficit of fluorine. The deficit of iodine in the organism of rats was caused by adding to water of merkazole, from a calculation 50 mg/ kg the masses of body on twenty­four hours during 3th weeks. The deficit of fluorine was designed by maintenance of animals on a low­caloric diet with the exception of products that contain much fluorine. Results of research and their discussion. Activity of urease in gomogenates of gums was (0,04 ± 0,003) mkkat/g in the group of intact animals with the obtained data were on (80,0 %) lower relative to the data in a group with the designed gingivitis (р < 0,01). The value of the activity of urease in the III and IV groups, where conditions of negative factors of environment were designed on a background gingivitis, exceeded the data of intact animals on 130,0 % and 205,0 % (p < 0,01),respectively. In the same time, activity of urease in III and IV groups was on 27,8 % and 69,4 % higher (р < 0,01) relative to the data of II study group. Estimation of biochemical indices from the data of general proteolysis activity (GPA), inhibitor of Trypsinum (IT) and their correlation (IT/ GPA) in the blood serum of experimental animals in the study groups proved that at the de­ sign of gingivitis (group II) there is an increase of GPA on 12,40 % (p < 0,01) relative to the values in the intact animals (I group). In the III­IV group investigated the increase GPA on 36, 93 % and on 65,17 %, respectively (р < 0,01). Thus, general proteolysis activity in experimental animals, where the environmental pathogenic factors were designed on the background of gingivitis, was on 21,83 % and on 46,94 % higher relative to the data of II experimental group (р < 0,01). In the groups of II, III, IV investigated the reduction of the Trypsinum inhibitor (IT) on 5,99 % (р>0,05), 0,51 % (р1 < 0,05) and on 24,79 % (р1 < 0,01), respectively, in relation to the data for the intact animals (I group). Thus, the decrease of correlation of IT / GPA was determined: from 0,31 in the I group of animals to 0,14 in the IV group. In ІІІ and IV experimental groups investigated reduction of IT on 15,46 % (р < 0,05) and on 20,0 % (р < 0,01), in relation 1 1 to the data of the ІІ experimental group. Conclusions. Undertaken experimental studies proved convincingly, that at experimental gingivitis, on the back­ ground of design of unfavorable environmental factors, increases markers of inflammation – elastase and urease, increase of indices of the protease­inhibitor system are investigated, thus the increase of analtube indices takes place with the increase of the combined xenobiotics loading that underlines the additional role of the last in an origin and progress of gingivitis and needs development of adequate medical and preventive events. 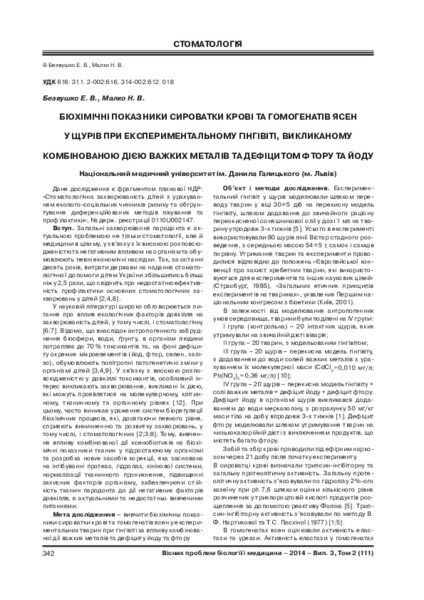