Generalized parodontitis (GP) is one of the most difficult and unsolved problems of modern dentistry, which occupies the second place after dental caries. According to the WHO data, as much as 98 % of the adult population of our planet have problems associated with parodontium pathology. Parodontitis is an inflammatory­ dystrophic disease with relapsing course, which is a common cause of tooth loss, seriously affecting the life quality of the adult population. The fact of high (65­92 %) morbidity poses a particular concern in 35­45 aged working persons, which is a large social component of the problem of GP. Clinical researches disclosed microbial, metabolic and hormonal causes of parodontitis. A significant role is given to the local factors in the pathogenesis of GP, however, systemic diseases that lead to profound changes of the body and structural lesions of parodont tissues also seem to have an important influence. As early as in 1923, McCall and Box for the first time used the term “parodontitis complex”, interpreting the parodont disease, the de­ cisive role in the occurrence of which was played by a systemic disease. It is proved that parodontitis is closely as­ sociated with the pathology of internal organs, especially duodenal peptic ulcer disease (DPUD). The question of combined lesions of the oral cavity and gut still occupy a leading place among the problems of dentistry. A number of studies have also confirmed the major role of changes of the central nervous system in the develop­ ment of GP. In particular, stress reaction, physiological basis of which is the activation of sympathoadrenal system, leading to the release of adrenaline into the bloodstream, is an important component in development of both the GP and DPUD. Several researches are devoted to peculiarities of clinical course of the GP in patients with DPUD, but reports about the condition of parodont tissues when its complications are scarce. Numerous studies were devoted to disclose the influence of DPUD on parodontal disease. Nevertheless, only few reports describe the parodont in patients with complicated DPUD, especially complicated by bleeding. It is suggested that antistress therapy can be included in the complex conservative treatment of GP already dur­ ing the stay of patients in the surgical department. With the aim of evaluation of stress influence on the state of parodontal tissues, we had investigated 19 patients with DPUD and 35 patients with DPUD, complicated by bleeding (DPUDCB). The stress response to bleeding was assessed by the level of adrenaline in 24h urine samples using fluorometric method of E. S. Matlina. Condition of the oral cavity was examined using clinical indicators: Shiller­Pysariev sample, Fedorov­Volodkina hygienic index and A. L. Russel (1956) periodontal index (PI). We found that concentration of adrenaline in daily urine of patients with DPUDCB was significantly higher (32,6 ± 15,9 mcg/day) in comparison to patients with DPUD (13,7 ± 5,1 mcg/ day) (p < 0,01). The patients with DPUDCB had significantly worse hygienic state of the oral cavity. The unsatisfac­ tory and bad state of oral hygiene using Fedorov­Volodkina hygienic index have been found significantly more often in patients with DPUDCB (р < 0,05). The inflammatory process in the gums was revealed in 76,1 % of patients using Shiller­Pysariev sample. The positive and strongly positive colouring was observed in 58,3 % of patients with DPUD­ CB, while in 17,8 % of patients with DPUD the gums became slightly positively and positively coloured. The positive Shiller­Pysariev sample was significantly more often revealed in patients with DPUDCB (р < 0,05). The study did not show the significant difference in the incidence of parodontitis in 87,1 % of patients with DPUD and 97,2 % of patients with DPUDCB (р>0,05). At the same time, a statistically significantly greater intensity of destructive inflam­ matory process in parodontal tissues for PI (A. L. Russel) – parodontitis II degree in patients with DPUDCB (52,2 %) in comparison to patients with DPUD (18,7 %) (р < 0,05) was noted. The investigation gives reasons to believe that development of bleeding as the complication of DPUD leads to an emotional stress in patients, which results in de­ terioration of the state of the oral cavity and aggravation of parodontitis. 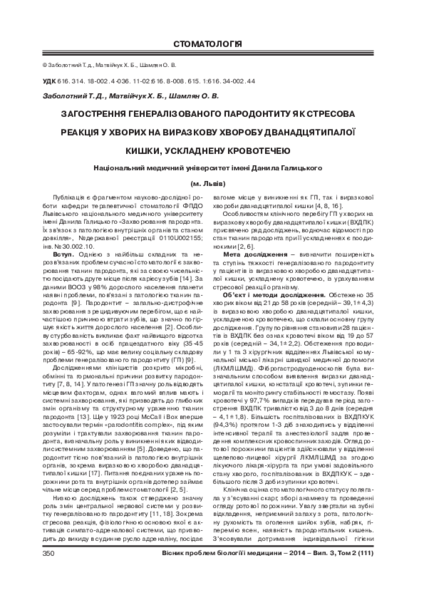