The prevalence of caries of deciduous teeth in children according to different authors is about 80 %. Its causes by local and general factors among which occupy a prominent position and diseases of ENT organs. The most widespread pathology of ENT organs in children younger than 5 years old are the diseases of limfoad­ enoid pharyngeal ring, its hypertrophy and inflammation. This feature is explained by the structure and functioning of the anatomical formation in young children. Lymphoid ring throat (Pirogov­Valdemeyer), which is formed by 6 tonsils, are a kind of filter for bacteria, but frequent inflammation may form the focus of chronic infection, which contributes to the development of general toxicity and sensitization of the organism. Neutralization of infectious agents that entered the tonsils is accompanied by immunobiological changes of the organism, the formation of ac­ tive immunity and leads to hyperplasia of these structures, in infants adenoid vegetations are formed. In these chil­ dren there is a violation of nasal breathing, mixed or mouth breathing is present, which in turn leads to tooth decay. Thus, study of the relationship between ENT pathology and indices of caries is important for planning and imple­ mentation of preventive measures aimed at increasing the resistance of dental hard tissues in children. In this regard, the aim of our study was to determine the prevalence and intensity of caries of deciduous teeth in children 3­5 years with hypertrophy of adenoids. We had examined a group of children aged from 3 to 5 years, the number is 40 persons. Among them there are 22 girls and 18 boys. The group of this age was taken because the children are in the period of stabilization of the development of primary teeth. Clinical examination was performed by the conventional method, we determined the prevalence and intensity of dental caries by performance of df index, functional respiratory test. The oral hygiene was determined by hygienic index Fedorova­Volodkina. Also determined the number of episodes of acute diseases of ENT organs for the year Of the 40 surveyed – 8 (20 %) children had adenoids hypertrophy of varying degrees of severity (according chil­ dren outpatients in organized children’s groups). Of the 8 children – 6 (75 %) people had adenoids of second degree and 2 (25 %) persons – III severity degree. 77 % of children in this group had more than 5 episodes of acute pathology of ENT organs, and in healthy children only 12 %. At 100 % cases are observed mixed or mouth breathing (determined by means of functional respiratory tests). All examined children with concomitant diseases were subcompensative (3 persons – 37,5 %) and decom­ pensative (5 persons – 62,5 %) the degree of caries activity. In the group of healthy children (32 persons) decom­ pensated degree of caries activity we have not found. The state of oral hygiene in children with pathology unsatis­ factory (2,3 points), and in healthy children is satisfactory (2,0 points). These data can be explained by the fact that one of the symptoms of adenoids hypertrophy is a violation of nasal breathing, namely preference mouth breathing. This situation in turn provokes dry mouth. Any change in the volume or quality of saliva composition leads to a decrease in its protective properties. Namely, there is a reproduction of aggressive oral microflora, increased formation of dental plaque, increasing the delay plaque, disturbed balance between demineralization and remineralization of dental hard tissues. All this contributes to caries of deciduous teeth in young children. In view of the results it can be concluded on the need to study the homeostasis of the oral cavity and preventive measures in children with diseases of the upper respiratory tract, such as hypertrophy of adenoids in the age period of 3­5 years for the prevention of caries and its complications in these children. 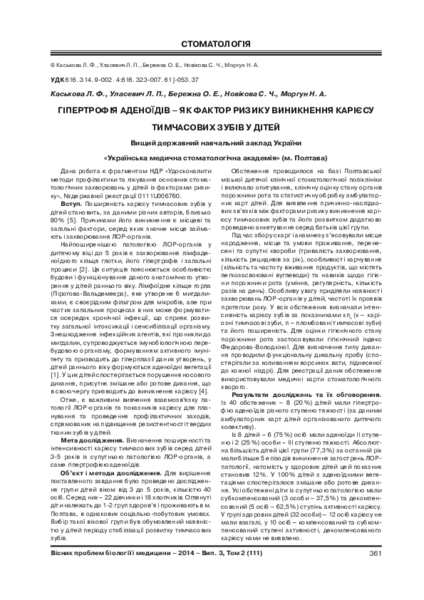