The purpose of the study. Identify some of the pathological mechanisms of immune deficiency (ID) in patients with recurrent herpetic stomatitis (RHS) based on the assessment of the genetic apparatus of T­lympho­ cytes and immune status of patients. Materials and methods. 180 patients with RHS were clinically, immunologically and cytogenetically examined in the period between 2005­2014 years. The average age of the examined was 27. 5 years. The diagnosis was con­ firmed by PSR. The clinical diagnosis of RHS was confirmed by PSR. Cytogenetic studies were carried out by the standard method. The count of chromosomal abbreviations (ACh) and associations of acrocentric chromosomes (AACh) was performed according to Denver nomenclature. Immune status of the patients was assessed by level II, according to the instructions to the commercial test­systems. In cultured cells in vitro the influence of exogenous interleukin­2 (IL­2) on the mitotic activity of T­lymphocytes and their genetic apparatus was determined. Materials were processed statistically using the package licensed program «MedStat» (2006). Results and discussion. With increasing severity of the pathological process (mild – moderate – severe) sec­ ondary immune deficiency is formed in patients with RHS mainly affecting T­system immunity. It is manifested by significant increase of instability of genetic apparatus of T­lymphocytes. In the peripheral blood of the patients the increased frequency of cells with ACh (1,7 ± 0,14 – 1,9 ± 0,13 – 2,1 ± 0,14 %; PLо 0,05) and the increased number of AACh (respectively 3,3 ± 0,11­ 4,1 ± 0,12 – 4,5 ± 0,12 units; PLO 0,5) were noted. Most often the fourth (33. 3 %) and the 21­st (37. 5 %) pairs of chromosomes, where genes are located, respectively, associated with IL­2 and herpes simplex virus type 1 are affected. During the period of relapse of the immune system of severely ill patients it is not able to increase the absolute number of lymphocytes with phenotypes CD3+, CD4+, CD16+ and activated cells CD25+ and 0, and 2AACh (KLO+2). In these patients the proliferative activity of T­lymphocytes to PHA and T­helper cells to mitogen lakanosa, production of IL­2, IL­4, IL­12, INFа, INFγ, FNOa, phagocytic activity of neu­ trophils, specific IgG and secretory IgA are suppressed. In patients with mild disease process all immunological parameters increase in the period of the relapse, and chromosomal aberrations of T­lymphocytes remain at normal regional indicators. One of the mechanisms of IN at RHS formation is the low ability of endogenous IL­2 to enhance the proliferation of cells­targets (CD3, CD4, CD16, CD25), activate the synthesis of IL­4, IL­12, INFa, INFγ, FNOa and involve the mitotic T­cells with more than 3 AACh (KL3+10) related memory cells. Adding in vitro culture of lym­ phocytes of severely ill patients exogenous IL­2, obtained from healthy patients, restores the proliferative activity of T­lymphocytes, due to the involvement in the mitotic cycle KL3+10. Conclusions. Pathogenetic mechanisms at RHS cause disturbances in the genetic apparatus of T­lymphocytes form system disorders affecting the stages of activation, proliferation and effective manifestations of immunocom­ petent cells. This should be considered in the development of effective treatment of RHS. 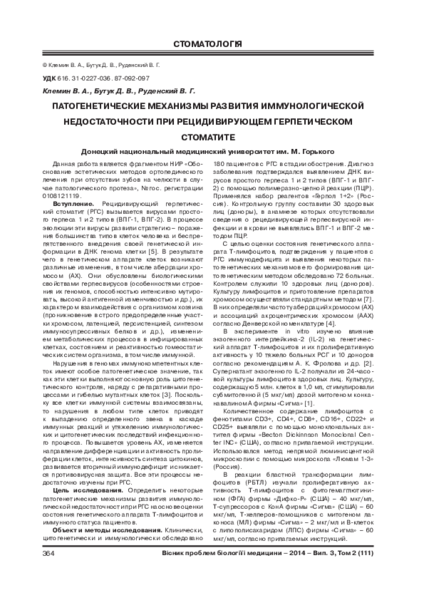