The paper contains results of studies on biochemical changes in rainbow trout organism under the effect of viral infection. Oxidative degradation, which occurs due to the accumulation of excess oxidation products and can cause a large number of pathological conditions, is a result of general non-specific reaction of cells and organism as a whole on external factors, one of which is the infectious pancreatic necrosis virus (IPNV). According to the international taxonomy of viruses, this virus belongs to the genus Aquabirnavirus of the family Birnaviridae For identification of possibility of oxidative stress development, we studied the state of lipid peroxidation in liver homogenates of clinically healthy young-of-the-year rainbow trout and their analogues experimentally infected with pancreatic necrosis virus. Young-of-the-year rainbow trout were reared in a specialized farm in Rivne region and were adapted for 14 days under aquarium conditions of the Ichthyopathology department of the IF NAAS. The fish were examined for bacterial and viral infections. The Ukrainian isolate IPNV VF-11 (6.8 LG TTsD50/cm3) was used for infection contamination. The virus was maintained in the laboratory collection of the IF NAAS. The experiments used 10 % liver homogenates of fish for biochemical analyzes. Sampling was carried out on the 3th, 12th and 22th day after the viral contamination. The level of diene conjugates (DC) and malondialdehyde (MDA) was used for determination of the status of lipid peroxidation (LPO) in liver homogenates. The state of antioxidant (AO) defense activity was determined by the AO enzymes – superoxide dismutase (SOD) and catalase. The experimental results showed that the infectious pancreatic necrosis virus (IPNV) promoted the activation of oxidative processes, and this indicates an increase of lipid peroxidation products such as: primary metabolites – diene conjugates (DC), and final – of malondialdehyde (MDA) in the rainbow trout liver homogenates infected with virus IPN, in the disease dynamics. Determination of SOD activity in the liver homogenates of rainbow trout in middle and final periods of infection showed a decrease in SOD activity by 66 and 55 %, respectively, compared to control values. A decrease of enzymatic activity of catalase in the liver homogenates of rainbow trout during the infection period was observed. During the initial period, we observed a decrease of this value by 17 % relative to control values, in the mid-infected period by 11 %, and finally the enzyme was lower than the control by 5 %, indicating on an intensification of the process of hydrogen peroxide formation in liver homogenates, excessive activation of free radical reactions associated with the accumulation of lipoperoxide products. The observed changes in the catalase activity level may be due to various reasons. First, the enzyme inactivation that may be caused by an excess of reactive oxygen species, an increased production of which during the oxidative stress has been proved. At the same time, it is known that the superoxide radical is a potent catalase inhibitor. Secondly, a decrease of catalase level can also be caused by mutation and oxidative DNA degradation under oxidative stress. Finally, the level of enzyme activity in cells, as is known, is regulated by the rates of their synthesis and decomposition. The catalase participates in other parallel reactions associated with ionic processes of H2O2 metabolism. In particular, this may be conversions in peroxisomes, where this enzyme composes 40 % of organelle content. The obtained results show that IPNV action impairs the balance in the peroxidative-antioxidative system in hepatocytes of rainbow trout and is manifested as an intensification of lipid peroxidation processes, reduction of antioxidative protection capacity that allows considering the obtained results as one of the components of the disease pathogenesis. 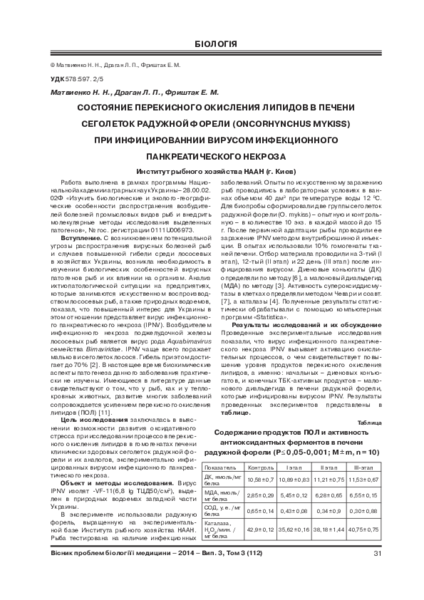