Introduction. Preservation and strengthening of reproductive health of Ukrainian population, its fertility is one of the leading problems of medical and social nature, that potentiated large-scale anthropogenic pollution. The aim of the research – to analyze the frequency and prevalence of infertility among the population of the industrial region, to determine its sex, spatio-temporal peculiarities and environmental determination degree. Materials and methods. Analysis of the frequency and prevalence of infertility conducted among the urban population of fertile age for both genders in Dnipropetrovsk region at the period 2006-2010 years according to the International Classification of Diseases (ICD-10). The study was conducted in industrial cities – Dnepropetrovsk and Krivoy Rog and control, relatively “pure” Novomoskovsk. The influence of toxic substances at the level of infertility was performed using the methods of correlation analysis and risk assessments. Results. The results of epidemiological researches indicate higher rates of male and female infertility in industrial cities – in 2,1-5,5 times higher compared to control city and in 1,1-3,9 times higher than the average statistical level in Ukraine and the results of research in some other regions of the country what appropriately refers Dnipropetrovsk region in rank of areas with consistently high levels of dysfunction of the reproductive system. That, together with the results of correlation analysis and risk assessment indicates a significant specific weight of environmental factors in the formation and development of this pathology, confirming the position of ecological reproductology about the negative effects technogenic contamination of the environment on human generative system, in particular, in terms of fertility. It is revealed, that the industrial city – Dnipropetrovsk characterized by diametrically opposite changes in the frequency of male and female infertility. For the period of 2006-2010 years, there has been a significant decrease in frequency of male infertility in 1. 2 times, compared with the increase in 1. 2 times this pathology among women. It was found an equal number of interactions between all investigated environmental xenobiotics and indicators of male and female infertility. It is revealed, that the highest share among heavy metals, that negatively affect the performance of male and female fertility has lead – 50 % and 45. 5 % respectively of all identified relationships, confirming globality and the dangers its dissemination in the industrial regions. The relative risk of infertility in the population, that exposed to increased anthropogenic burden conditions for a comprehensive income of xenobiotics, especially lead to the body is 47. 12 ± 1. 42 for males and 5. 96 ± 0. 29 for women, indicating a greater environmental conditionality this nosology among the male population.

frequency, the prevalence of infertility, an industrial region, the impact, the environmental determinacy 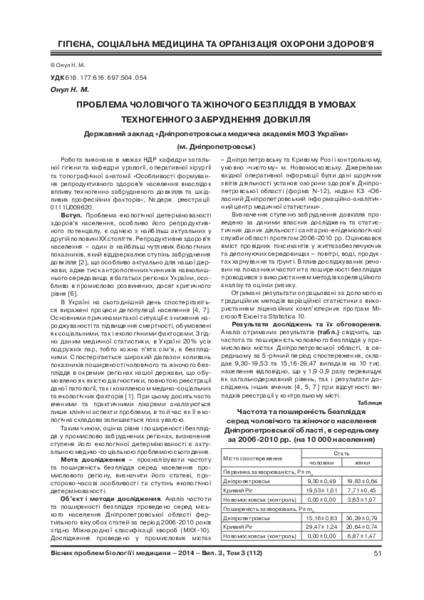