Combined chest trauma is one of the worst kinds of trauma and is not simply the amount of damage, each of which reinforces the other, and leads to the syndrome of mutual encumbrance. In addition, this type of injury is characterized by multiplicity and severity of injuries to internal organs. One of the central components of the pathogenesis of traumatic disease is considered endotoxicosis where malfunction detoxification system leads to the syndrome of endogenous intoxication, which occurs in violation of the regulation of microcirculation and physical state of the blood and lymph circulation, gas exchange functions of immunoreactive et al. On the one hand, it is endotoxicosis cause dysfunction of organs and systems of the majority and the formation of multiple organ failure on the other – that dysfunction of vital organs (liver, kidneys, gastrointestinal tract, central nervous and cardiovascular systems) leads to inhibition of the detoxification process with the development of the phenomena of endotoxemia. The purpose of this study was, to follow the dynamics of changes in the functional state of the internal organs and to establish their relationship with the level of endogenous intoxication. Experiments were performed on 48 non-linear white male rats, which were divided into two groups: control and experimental. The control group consisted of 8 intact animals. The remaining animals were studied group, which was divided into 5 batches of 8 animals each, depending on the time of observation. Animals of the experimental group under thiopental sodium anesthesia (40 mg x kg -№ body weight) using a simulated trocar left-sided pneumothorax with closed fracture of the ribs and combine them with a fracture of the left femur. After 1, 3, 7, 14 and 28 days post- traumatic period took blood for biomedical research. In this case the generally accepted methods determined: total protein, creatinine, alanine aminotransferase, aspartate aminotransferase, total bilirubin, hydroxyproline, alkaline phosphatase, and determined erythrocytic index contents molecular weight peptides medium SMP1 (defined at λ = 254 nm), SMP2 (defined in λ = 280 nm), their ratio Ksmp. = SMP2 / SMP1. Resulting in research digital material subjected to statistical analysis using Microsoft Exel for Windows 98 with the definition of average values and their standard errors. Obtained during the study data revealed that the combined trauma of the chest and lower limbs in rats is accompanied by a significant increase in the level of endogenous intoxication as early as the next time after its application. This leads to an increased burden on agencies that perform antitoxic function: liver and kidney. Increased functional load in these organs is reflected in the level of blood biochemical parameters. And faster and more active liver reacts somewhat slower, but longer observed deviations from the side of renal function. This is consistent with modern concepts under which endotoxemia, which is associated with increased degradation of tissue, increased catabolism process, insufficiency of liver and kidney is considered one of the central components of the pathogenesis of traumatic disease. Disorders functioning detoxification system under these conditions, in turn, lead to the syndrome of endogenous intoxication in which there is disturbance of microcirculation regulation and aggregation of blood and lymph circulation, gas exchange function immunoreactive system, etc. All of this may underlie the development of multiple organ failure. Concerning oxyproline level which indicates the intensity of bone resorption, its correlation with the dynamics of total protein may be one of the criteria for assessing resorptive processes in traumatic injuries of the skeletal system, and the alkaline phosphatase may be reflected intensity of bone formation and functional state of the liver. 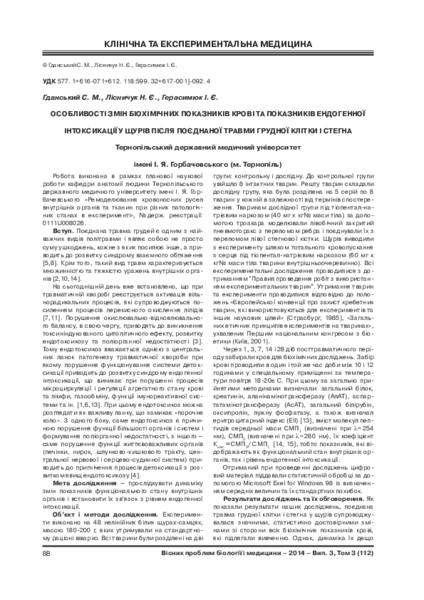