Simultaneous Therapy of Duodenal Ulcer In Conjunction With Periodontitis

Purpose of Research. To study the mechanism of development of duodenal ulcer (DU) and chronic periodontitis (CP) conjunctions and justify a simultaneous therapy of these diseases using medicinal mixture. Materials and Methods. To reach the objective, 80 patients (38 men and 42 women aged from 21 to 50 years old) with chronic periodontitis in conjunction with duodenal ulcer have been examined. They have been suffering from the disease up to 7 years. All examined have been divided into two groups: patients from the first group received treatment according to the suggested regimen and patients from the second group received conventional treatment. Results and Discussion. Clinical examinations revealed symptoms, specific to duodenal ulcer: pain in epigastric region, heartburn, eructation, nausea, vomiting, hyporexia, constipation, and increase in acidity of gastric juice. Ulcer of duodenal cap was diagnosed in all patients by fibrogastroscopy. Clinical examinations and indices of condition of oral cavity and duodenal region tissues, as well as parameters of defense reactions (tissue and general immunity, LPO, etc.) establish significant pathoanatomical and pathophysiological lesions, specific to both CP and DU and burdening in conjunction with these diseases. Multicomponent medicinal mixture Vipromak, suggested for simultaneous treatment of CP in conjunction with DU, is of antibacterial, disinfecting, antiseptic and anti-inflammatory properties. It is immunity enhancer, antioxidant and restorative, ulcer healing complex medication, which can be assigned to pathogenetic drugs for treatment of the referred diseases. Medicinal mixture Vipromak provides with more apparent therapeutic action, than other medications, used for treatment of CP in conjunction with DU, and it should be recommended for simultaneous treatment of these diseases in one and the same patient at hospitals and polyclinics. Conclusions. Chronic periodontitis and duodenal ulcer are one of the widespread diseases of digestive system in dentistry and gastroenterology, respectively. Their conjunction burdens the status of patient and creates certain difficulties during the treatment. Clinical analysis of homeostasis in patients with periodontitis and duodenal ulcer established similarity in pathogenesis of their development, including lowering of tissue, cellular and humoral immunity, hyperoxidation with the development of infection-inflammatory process in gums and duodenal region, manifested in the form of periodontitis and duodenal ulcer. Clinical-laboratory and instrumental parameters showed that medicinal mixture Vipromak, used in complex simultaneous treatment of chronic periodontitis in conjunction with duodenal ulcer, has evident therapeutic effect on both pathological processes. Complexity of a problem of generalized periodontitis in conjunction with duodenal ulcer in treatment mode of their recurrences and periodontal sepsis and ulcerative bleeding complications requires further diagnostic and therapeutic examinations. 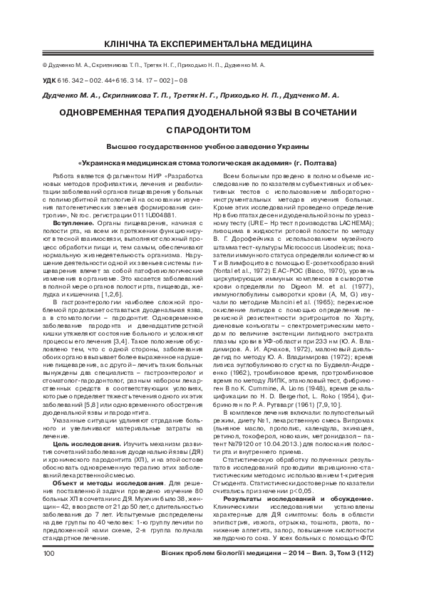