Sex hormones play important role in the regulation of the cardiovascular system. It was found that estradiol had vasodilatation, antiinflammation and antiapoptotic effects. Progesterone can prevent aldosterone effects on vessels. Majority of the studies dedicated to evaluation of the effect of sex steroids on cardiovascular system were done in vitro. Phundoscopy is the one of the noninvasive and reliable methods to assess microvascular vessels in vivo. Digital photo allows calculating arterio-venular ratio. It was shown that arterio-venular ration had prognostic value and was associated with cardiovascular risk. The aim of the work was to study arterio-venular ratio in perimenopausal women in dependence of sex hormones level. Twenty-seven patients with normal coronary arteries were included in the study. Computer tomography was used to evaluate coronary artery state. All woemen were perimenopausal. Studied patients had periods of amenorrhea more than 60 days or they did not have menstruations. All of them were seen by gynecologist to exclude pathology of reproductive system. After the eye examination at baseline, optical coherent tomography was performed with Topcon 3D OCT-1000 Mark II (Japan). Retinal photograph centered on the optic disk and macula was taken of 1 eye by use of automatically focusing camera. Arterio-venular ratio was calculated with the help of TrueMap™ soft wear. Retinal photographs were digitized and the diameters of individual arterioles and venules coursing through a zone located one half to 1 disc diameter from the optic disc margin were measured on the computer by trained ophthalmologist. Arterial and venular diameter was measured in two parallel vessels of the same grade. Three consecutive measurements were done. Blood level of follicle stimulating hormone, estradiol, progesterone were assessed in all women. Data did not meet normal distribution and median, 25 and 75 quartiles were used to compare the groups. U Mann-Whitney test was used to test null hypothesis. Twelve (44,4 %) patients had FSH level more than 25 IU/l. Age median in the studied population was 52 [47- 54], SCORE level – 1,5 [1,0-2,5], body mass index – 29 [26-31] kg/m2. Systolic and diastolic blood pressure in the all group was 130 [110-140] and 75 [70-90] mm Hg. Median of total cholesterol level in the all group was 5,07 [4,61-5,70] mmol/l. Patients were divided into three groups according to level of progesterone and estradiol in accordance to 25, 50 and 75 quartiles. 25 %, 50 % і 75 % quartiles the hormones were used to compose groups. Estradiol level in the groups was: 1st group – 25,15 [15,50-30,85]; 2nd group – 57,51 [46,19-87,33]; 3rd group – 222,87 [158,37-311,9] pg/ml. Progesterone level in the 1st group was 3,04 [2,13 – 3,5]; in the 2nd group – 4,50 [4,29-5,16] and in the 3rd group – 11,64 [8,75-45,53] nmol/l. Arterio-venular ratio increased with estradiol level elevation. In the 1 st group median of arterio-venular ratio was 0,75 [0,70-0,77]; in the 2nd group – 0,79 [0,75-0,80] and in the 3rd group – 0,83 [0,75-0,90] (р = 0,067; р2-3 = 0,047; р1-3 = 0,007). Arterio-venular ratio also increased with elevation of progesterone level, but the differences between groups were not statistically significant. In the 1 st group median of arterio-venular ratio was 0,80 [0,72-0,85]; in the 2nd – 0,90 [0,70-0,90] and in the 3rd group – 0,90 [0,86-0,91] (р1-2 = 0,051; р2-3 = 0,024; р1-3 = 0,049). The limitation of the study is small group size and difficulties of arterio-venular assessment in women with hypertension and diabetes mellitus. Conclusion: decrease of estradiol level in perimenopausal women is associated with low arteri-venular ration in women without of coronary atherosclerosis. Assessment of arterio-venular ratio may be useful in assessment of state of microcirculation in women without cardiovascular disease during perimenopause. 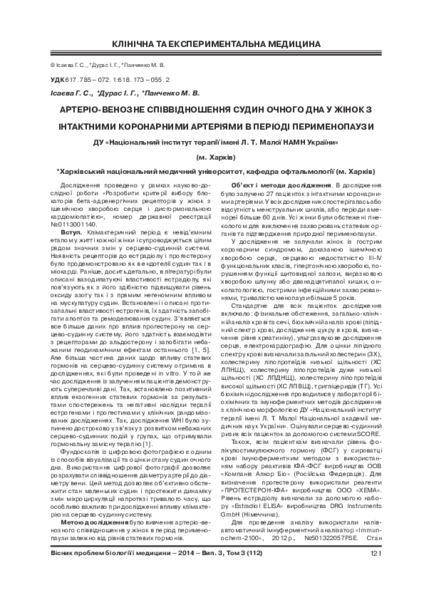