Introduction. Diabetic retinopathy pathogenesis includes mechanisms of the deterioration of retinal neuronal activity, which is expressed in electroretinographic (ERG) manifestations. It is reasonable to register ERG in diabetic rats as an indicator of therapeutic potential of influences with low intensity electromagnetic irradiation of millimeter bandwidth (MBEMI) and antioxidants administration. The aim was to investigate the ERG peculiarities in rats with streptozotocin (STZ) – induced diabetes under conditions of treatment with MBEMI and alpha – lipoic acid. Methods of investigations. In Wistar rats diabetes have been modeled via i. p. STZ administration (50,0 mg/ kg, i. p.). In 0,5 months from the moment of STZ injection and during next two months treatment with exposure to MDEMI (15,0 min; 7,1 mm; 0,1 mW/cm2) and alpha – lipoic acid (20,0 mg/kg, i. p.) was performed with the next ERG registration. Results. The net increase of latency of b-wave in ERG by 10,4 % along with the reduction of it’s amplitude by 2,24 times pertained to intact rats was seen in diabetic animals (P < 0,05). At the same time the latency of а-wave was greater by 25,1 % (P < 0,05), while the dynamics of its amplitude was slower by 2,47 times (P < 0,05). The oscil- latory potentials W2 and W3 latency increased by 42,5 % and 42,8 % (P < 0,05), while their amplitude were reduced by 5,0 and 3,37 times correspondently when compared to control group (P < 0,05). Combined usage of MDEMI and alpha-lipoic acid caused the elevation of b-wave amplitude, which exceeded both ones registered in the group with alpha-lipoic acid treatment by 19,5 % (P < 0,05) and in the group with MDEMI influences by 49,5 % (P < 0,05). The velocity of a-wave amplitude dynamics also exceeded those ones which have been observed in the group treated with alpha-lipoic acid (by 40,1 %, P < 0,05) and group influenced with MDEMI by 60,3 % (P < 0,05). This index also exceeded such one determined in diabetic rats without treatment by 91,8 % (P < 0,05). The latency of oscillator potential W2 in the group which was given combined treatment with MDIMD and alpha – lipoic acid was reduced by 18,4 % when compared with the group which was treated with MDIMD and by 15,2 % when compared with the group treated with alpha-lipoic acid (P < 0,05). Under influence of combined treatment the amplitude of W2 potential increased by 2,74 times when compared with not-treated STZ-diabetic rats (P < 0,05). At the same time it exceeded the amplitude of W2 registered in group influenced with MDEMI by 2,37 times (P < 0,05) and exceeded such one registered in rats which have been treated with alpha-lipoic acid by 1,87 times (P < 0,05). The amplitude of W3 potential exceeded that one registered in diabetic rats without treatment by 95,6 % (P < 0,05) and it also exceeded the similar index in rats with MDEMI exposures by 77,4 %, (P < 0,05) as well as that one in alpha-lipoic acid treated rats by 42,6 %, (P < 0,05). Conclusions. STZ-induced diabetes is followed by ERG deterioration mainly manifested in the increase of la- tency and reduction of amplitude of a-, b-waves, and oscillatory W2 and W3 potentials. Combined usage of MDEMI and alpha-lipoic acid caused potentiated corrective influences upon ERG- manifested diabetes deteriorations. 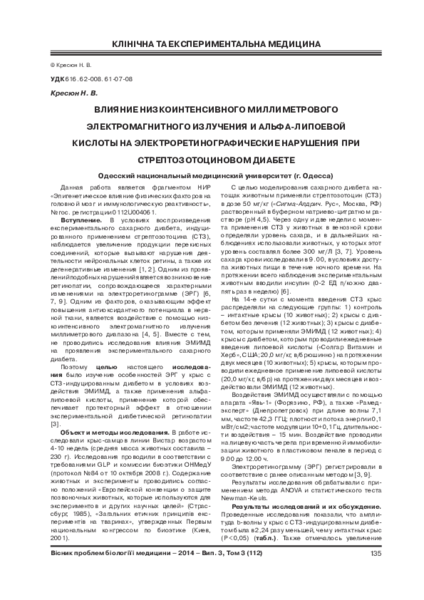