Medicine interest to the preparations of higher mushrooms is connected with the appearance of scientific data about their unique immunomodulatory action. During a long period of medicinal mushrooms investigation scientists obtained substances with important biological and pharmacological properties. Mushrooms Cordyceps sinensis and Ganoderma lucidum act as powerful immunomodulators, which inhibit development and prevent dissemination of tumors. It is considered that antitumor activity of Cordyceps is determined by immunomodulatory action, whereas antitumor activity of Ganoderma is connected with both immunomodulatory and direct cytotoxicity against tumor cells. A lot of human cells, particularly macrophages, possess cytotoxicity mediated by production of reactive oxygen species. After phagocytosis of pathogens macrophages develop a system of reactions, called “respiratory burst”, the result of which is the formation of superoxide anion. Next reactions lead to formation of other toxic metabolites, such as hydrogen peroxide, hypochlorous acid and singlet oxygen. The aim of our work is to investigate influence of medicine “Cordyceps & LingZhi” on the oxygen-dependent metabolism of murine peritoneal macrophages and human blood mononuclear cells. Human blood mononuclear cells obtained by centrifugation in ficoll-verographine gradient. Murine peritoneal macrophages obtained by the following procedure. 5 ml of Hank’s medium were injected into the abdominal cavity, and then anterior wall of abdominal cavity was massaged. Generated suspension of cells was taken away and centrifugated at 1500 rpm during 10 minutes. Sediment was resuspended in 1 ml of Hank’s medium and diluted the final cell concentration to 3x106 cells/ml. The number of vital cells counted by standart methodic, using supravital staining by trypan blue. In experiments liquid medicine “Cordyceps & LingZhi” (McAster, Ukraine, Certificates UA. 1. 003. X7862-13 from 17.07.2013; UA. 1.003. Х001638-13 from 15.02.2013; UA. 1.003. Х001637-13 from 15. 02. 2013) was used. We prepared water solutions of medicine in 3 concentrations: 50 mkg/ml, 100 mkg/ml, 200 mkg/ml. 20 mkl of medicine solution added to each experimental well of 96-well microplate. Functional activity of cells was determined by reduction of nitroblue tetrazolium (NBT-test). For the determination of statistic reliability of differences between experiment and control Student’s t-test was used. Mononuclear phagocytes may act as cytotoxic or cytostatic for the wide specter of tumor cells, acting directly of mediated by another cellular and molecular mechanisms. Activated macrophages realize their antitumor action by secretion of different soluble factors, such as products of oxygen metabolism, which possess powerful bactericidal and cytotoxic properties. During carcinogenesis mononuclear phagocytes cytotoxicity is inhibited as the result of tumor growth. Furthermore, alternative activation of tumor-associated macrophages promotes tumor progression. Application of 50 mkg/ml medicine results in 20-fold increase of spontaneous oxygen-dependent metabolism of human peripheral blood mononuclear cells as compared to control. 100 mkg/ml of medicine increased this index by 22 times, but as compared to another concentrations there was no difference. 200 mkg/ml of medicine was the most effective and activated “respiratory burst” of these cells by 50 times as compared to control and in 2 times as compared to another concentrations of medicine. Reaction of murine peritoneal macrophages was similar to those of Application of 50 mkg/ml medicine resulted in 14-fold increase of peritoneal macrophages oxygen-dependent metabolism as compared to control. The most effective doses were 100 and 200 mkg/ml, which increased oxygen-dependent metabolism in 19 and 18 times, respectively, as compared to control, and reliable increase as compared to 50 mkg/ml of medicine. Thus, medicine “Cordyceps & LingZhi” is very effective stimulator of human and murine phagocytes. With regard to importance of cytotoxic function of mononuclear phagocytes at tumor growth, “Cordyceps & LingZhi” is the perspective medicine for immunomodulatory therapy of cancer. 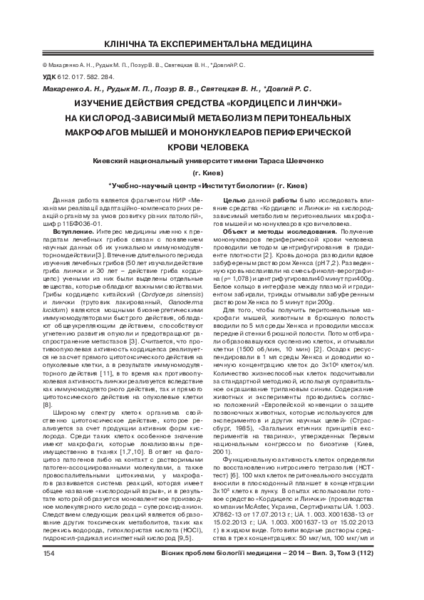