Bulletin of problems biology and medicine / Issue 3 part 3 (112), 2014 / The Content of Marrow Cells under the Action of Radiation and Lead
Ostrovska S. S.

The wide general spectrums of pollutants are typical for the factors of the urbanized and technogenic environment, among them the special place is occupied by an ionizing radiation and heavy metals. The special value is acquired by the problem of change of sensitiveness of the radiated organism to the next influence of toxic factors of the environment. Taking into account, that marrow has high radiosensitivity, and lead influences on the development of anemia. The estimation of results of their united influence has not only great theoretical but also practical value. The research aim was to study the effects of separated and combined action of external irradiation and lead on the content of myelocaryocytes in the rats’ marrow. The object and methods of the research. The white nonlinear rats of both sexes were used. The general gamma- irradiation was conducted singly with the dosages of 0.5 Gy. and 5 Gy. Right after irradiation during 10 days to the irradiated and non-irradiated rates it was entering acetous lead every day through a metallic probe in stomach in a toxic dose with the further period of rehabilitation during 20 days. The animals were led out the experiment through 1, 3, 5, 10, 20 and 30 day after irradiation, the last two terms correspond to 10 and 20 days of rehabilitation period (after finishing lead poisoning). The shins were divided into parts in rats. The suspension of the cells was got by the washing of marrow with the help of chill environment 199. The content of the cells was counted in the Goryaev’s chamber. Data was expressed in percents to the amount of the cells of marrow that was got in intact control on the cor- responding term of the research. Death of the animals was registered in the process of the experiment. The results of the research and their discussion. The dynamics of quantitative changes in the marrow of this process and its evidence in every case are different. So, it turns out clear dose dependence of decline cellularity of the marrow through 3 days of the post radiation period. After irradiation of the dose 0.5 Gy. the amount of the myelocaryocytes reduces on 24,7 % (p < 0.05), after irradiation of the dose 5 Gy. – on 70,2 % (p < 0.001, in intact control contained 124,7 х 106 ± 4,9 х 106). In the next days regeneration of the marrow occurs that finds a reflection in the restoration of the cells amount. This process flows far more intensive with irradiation of less dose, after that in interval between 10-20 days hyperplasia of the marrow is observed, as a results in 20 days the number of nuclear cells exceeds the level of intact control on 12,5 % (р < 0.05). In the period of leaden intoxication without irradiation already after 3 days poisoning the content of the cells of the marrow diminishes and maximally goes down in 10 days on 29,4 % (р < 0.05). After 10 days of the regenerative period there is a tendency to the increase of the amount of the myelocaryocytes, however the full regeneration of the cells does not occur. The combined action of irradiation and lead is signified by potentiative effect that at the greater dose of irradia- tion is expressed more considerable but here in both cases the capacity of marrow for regeneration goes down and that is why renovation of the cellularity does not take place to the end of the experiment. Conclusions:Irradiation of doses 0,5 Gy. and 5 Gy. reduces the amount of the myelocaryocytes in the first day of the research with the difference in the dose 45 %, for 20 days at a dose 0,5 Gy. indexes exceed the level of the intact control on 12 %, at a dose of 5 Gy. the full renovation does not take place. The combined action of irradiation and lead reduces the capacity of the marrow to regeneration to the end of the experiment, thus the difference of indexes between the doses pf irradiation folds 20 %, renovation of the marrow cells is not observed till the end of the experiment. 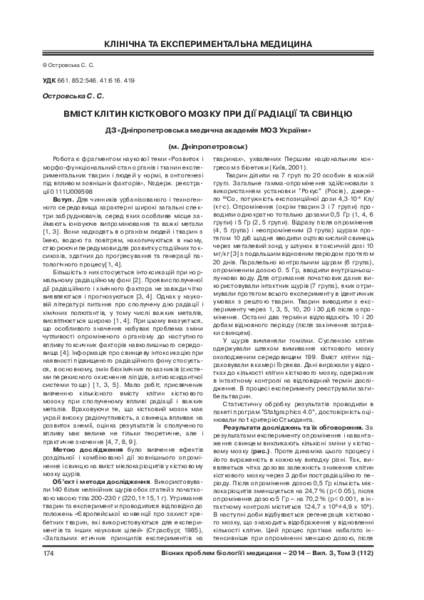