Clinical Variants of the Somatogenic Asthenic Syndrome and the Cardiovascular Risk

The aim of the research was to study the frequency and kind of different clinical variants of SAS among patients, stratified by the level of CVR. Materials and methods. The primary information base for the implementation of research was the result of complex clinical and anamnestic survey of 450 young patients, 400 of them had NPPS and who were previously stratified by the level of cardiovascular risk (CVR), defined by the «SCORE» method. The usage of this method involved taking into account: age, gender, presence of smoking, blood pressure levels and other, and provided the possibility of extrapolation of possible risk to the older age. 99 patients were assigned to the group of minimum (low) CVR (nLOW = 99), 102 patients – medium (nMED = 102), 97 patients – high CVR (nHIGH = 97) and 102 persons with diagnosed cardiovascular disease were assigned to a group with realized CVR (nX = 104). Results and their discussion. Clinical psychopathology research let us to determine the structure of SAS and general patterns of distribution of its clinical variants depending on the level of CVR. Among 102 patients with a medium CVR was found, that SAS frequency in this group did not differ from that seen in the group of minimum CVR and amounted (21,6 ± 4,1) %, but in the structure of the SAS, there were significantly (p 0,05) more clinical variants of asthenic type in groups with a medium CVR, the frequency of which was (11,8 ± 3,2) %, whereas in other clinical options of this group with the same frequency was diagnosed (in the range of (2,0 ± 1,4) % – a dissomnic variant, till (4,9 ± 2,1) % – an asthenic subdepressive variant (p > 0,05). Among the 97 patients with high CVR it was found, that SAS occurred significantly (p 0,05) lesser, than in the group of minimum CVR – in (10,1 ± 3,2) % of the patients; clinical variants of SAS, arranged by the frequency of diagnostics, were detected equally often (from (1,0 ± 1,0) % – dissomnic, till (3,0 ± 1,7) % – asthenic neurosis and asthenic subdepressive variants (p > 0,05). Among 102 patients with realized CVR (patients, suffered from CVD) it was found, that SAS occurred significantly (p 0,05) more often, than at high CVR – in (20,6 ± 4,0) % of surveyed: the most common was asthenic form of SAS (p 0,05), and most rarely diagnosed – dissomnic variant of SAS – in (2,0 ± 1,4) % of patients. Thus, an astenic type of SAS was most inherent to the patients with realized CVR and to patients with a medium level of CVR (respectively (12,7 ± 3,3) % and (11,8 ± 3,2) %, p > 0,05), while other clinical variants of SAS were found with equal frequency in patients with different levels of CVR. Conclusions. The frequency and kind of clinical variants of SAS in patients with different levels of CVR were defined, and the highest frequency of asthenic type (p < 0,05) in a group of patients with high CVR, compared with other clinical variants, was proved. It was proved, that asthenic type of SAS is the most inherent to patients with realized CVR and to patients with medium level of CVR (accordingly (12,7 ± 3,3) % and (11,8 ± 3,2) %), whereas other clinical variants of SAS was found with equal frequency in patients with different levels of CVR. The frequency and kind of SAS, especially in patients with high CVR, determine the need for more detailed study from the standpoint of effective use of behavioral adjustment as a component of medical and psychological support for patients with CVR. 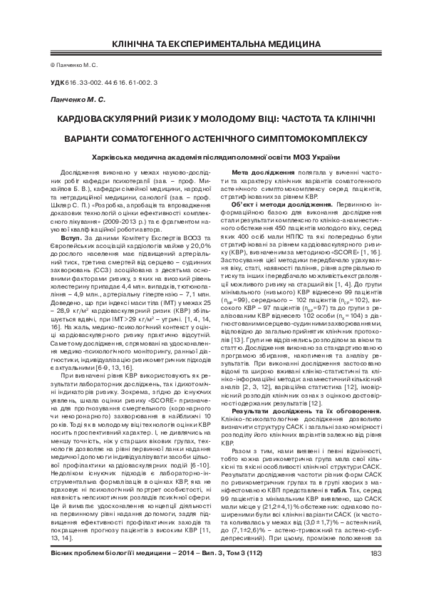