Introduction. In recent years, the incidence of diseases of the endocrine system, due to various etiological endogenous and exogenous factors, was characterized by growth, both worldwide and in our country. The problem has become particularly acute after the Chernobyl accident. Diseases of the endocrine system, particularly the pathology of thyroid, adrenal gland, pancreas, causing great social and economic damage that was determined by the cost of medical care and social security (due to military disability, disability, premature death). Aim: To analyze the level, dynamics and structure of endocrine pathology among servicemen of the Armed Forces of Ukraine for 2001-2013 years. Materials and methods. Material studies have credentials in form 1 and 2-MED to determine the state of the overall incidence and incidence of endocrine diseases, nutritional and metabolic diseases (class IV ICD-10) among the personnel of the Armed Forces of Ukraine. Used analysis were carried out in dynamics for 2001-2013 years. Results and discussion. Describing the incidence of endocrine disease among the population Ukraine’s worth noting that there is an increase of morbidity associated with both the influence of environmental factors and metabolic disorders. The highest overall incidence rate for class IV (Endocrine, nutritional and metabolic) for the 2001-2013 years period was recorded among officers and was 2.46 % 0. The index of general morbidity in class IV conscripts for years 2001-2013 averaged 1.93 % 0. The incidence of conscripts varied, but at the same time the highest rates, yaks were 0 3. 18 % observed in 2008, and the lowest 1. 29 % 0 in 2003-2004. If among the conscripts not tended to grow pathology of the endocrine system, which can be explained by the fact that they are called upon to armed forces healthy, among contracted military officers and tended to increase in this disease. The structure of endocrine diseases troops as among the population of Ukraine, the main place is thyroid cancer (43 %) and diabetes mellitus 29 %. Among thyroid pathology is most common diffuse goiter and II c. (31 %). Conclusions. There is a steady increase in the prevalence of endocrine pathology among the population of Ukraine, and among the soldiers of the Armed Forces of Ukraine. The highest overall incidence rate for class IV disease during the period 2001-2013 he recorded among officers and averaged 2.14 % 0. The structure of endocrine disease among soldiers thyroid pathology dominated (43 %) and diabetes -29 %. We need to continue research into the causes of growth endocrine pathology among military personnel, including thyroid disease. 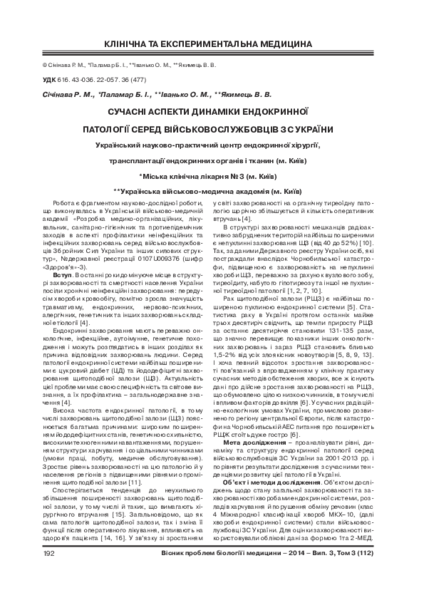