Bulletin of problems biology and medicine / Issue 3 part 3 (112), 2014 / Efficiency of Metabolic Therapy on the Perfomance Dynamics of Protein and Lipid Metabolism of Tod- dlers with Protein –Energy Malnutrition against the Background of Perinatal Lesions of the Central Ner- vous System
Tokarchuk N. I., Chygir I. V.

Introduction. Modern peculiarity of protein-energy malnutrition (PEM) course is primarily due to metabolic disorders that are the basis for the emergence and progress of pathological changes in the child’s body. According to the data of literature, a significant role in the cellular energy transfer plays carnitine. Main metabolic function of L- carnitine is to transport long chain fatty acids across the mitochondrial membrane allowing L- carnitine to provide the energy body with. Also L- carnitine has metabolic, anabolic and antihypoxic function. Objective: to estimate the efficacy of the drug “Agvantar” of protein-energy malnutrition of toddlers which had emerged against the background of perinatal lesions of the central nervous system. Object and methods. We have examined 70 children with PEM against the background of perinatal lesions of the central nervous system (CNS). Children’s age ranged from 1 to 12 months of life. The study was based on clinical examination of the children with an assessment of their physical development. To study the efficiency of metabolic therapy PEM against the background of perinatal CNS lesions of toddlers the drug “Agvantar” was used. This drug comes in the form of syrup 1 ml of which contains 200 mg Levocarnitine. “Agvantar” was administered orally to children of 0. 5-1. 0 ml twice a day for 30 minutes to eat meals for 25-30 days. Side effect of the drug Agvantar was not observed with any patient. The patients were divided into two groups: 35 children got with complex therapy PEM with Agvantar, 35 children got only traditional therapy and made the comparison group. The control group consisted of 30 practically healthy toddlers with normal physical development. Results and discussion. The structure of perinatal CNS lesions predominated hypoxic-ischemic damage to the central nervous system. Among them the syndrome of motor disorders occurred in 21 (30 %) of children, muscular dystonia syndrome in 18 (25,7 %) cases the syndrome of vegetative-visceral disturbances in 14 (20 %) cases. Hy- drocephalus took place in 10 (14,3 %) of the children and microcephaly in 7 (10 %) of cases. 41 % of the toddlers of the studied group had second grade of PEM. Whereas the degree of PEM was detected in 33,3 % of the children and 25,7 % of the respondents had the third degree PEM. The term of hospital treatment of the toddlers was 28 ± 2 days. Assessment of the dynamics of body weight was performed daily. We used an average data of these parameters for clinical efficacy of metabolic therapy. Thus the rate of weight gain during in patient treatment in the first group was (0,6 ± 0,1 kg) while in the second group of children the figure stood at (0,4 ± 0,06 kg) (p < 0,05). As most disorders of protein metabolism are the basis of PEM. Investigated range of values of serum protein did not reveal probable differences between groups for comparison of total protein (60,5 ± 2,1 g/l and 61,3 ± 0,9 g/l). We have studied the influence of the drug «Agvantar» on parameters of protein metabolism. Thus the first group of the research at the end of the course of metabolic therapy was observed to have a reliable increase for total serum protein in comparison with the index of the childrens of the compared group (p < 0,05). In addition, the first group of children was noted for normalization of IGF-1 compared with the original data (respectively (48,4 ± 1,1 ng/l) before treatment and (54,1 ± 1,3 ng/l) after treatment) (p < 0,05). The results of the study of the dynamics of lipid abnormalities of examined children with use in metabolic therapy the drug of «Agvantar» showed a significant increase in cholesterol, triglycerides and LDL (p < 0,05). Thus the rate of cholesterol, triglycerides and LDL to treat the first group was (3,13 ± 0,25 mmol/l, 1,7 ± 0,2 mmol/l and 1,57 ± 0,18 mmol/l respectively) and after treatment these figures increased reliably (3,4 ± 0,28 mmol/l, 1,75 ± 0,2 mmol/l and 1,62 ± 0,18 mmol/l, respectively) (p < 0,05). While the children in the second group of studies were treated on tradi- tional indicators of diet cholesterol, triglycerides and LDL cholesterol did not change reliably (p > 0,05). Conclusions. It was assertained that the inclusion of the drug «Agvantar» in the medical complex of conventional therapy effectively reduces the clinical manifestations of protein- energy malnutrition against the background of perinatal lesions of the central system of toddlers. In addition these data demonstrate the ability of the drug «Agvan- tar» to promote positive tendency of protein rates and lipid and metabolism of toddlers with PEM which emerged against the background of perinatal lesions of the CNS. 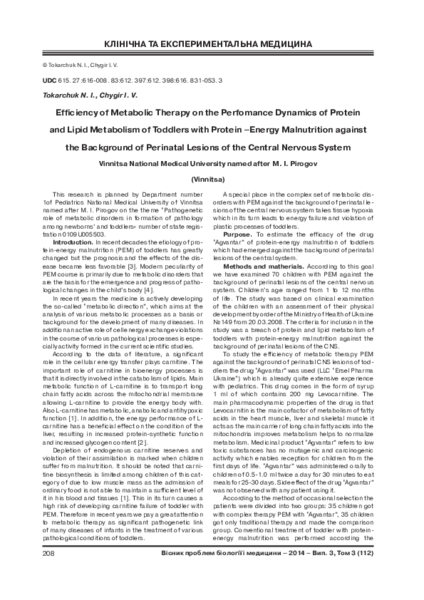