Infections, which the etiologic agent is S. aureus, including more than 100 nosological forms. Staph- ylococci can affect any organs and tissue of the human body. The most frequently observed variable damages of skin and soft tissues, as well as various purulent – inflammatory diseases of human organs and systems. They were characterized by a variety of flow – from mild to severe generalized forms. S. aureus plays a leading role in the occurrence of community-acquired purulent – inflammatory diseases of different localization. They holds a leading position in the etiological structure of nosocomial infections. According to the literature, staphylococci have the ability to form chronic (persistent) infection which develops in native tissues and artificial materials which implementing into the body. Such infections are associated with the formation of biofilms. Objective: To examine the ability of formation biofilm in clinical isolates of S. aureus, received by different eco- logical niches of multidisciplinary hospital. Materials and methods: the objects of researching were 323 strains of S. аureus, from them 216 received by clinical material from the inpatients of multidisciplinary hospital (mucus of upper respiratory tract, from trophic ul- cers of lower limbs, ears, eyes, urine), 62 strains, received by the objects of environment of hospital (air manipu- lation rooms, washing off from surfaces) and 45 strains, received by the medical personnel’s nasopharynx. The biofilm of staphylococcus was painted by crystalline violet; the optical density was measured Bio rad auto reader (model 450) at the wave-length of 450 nm. For leveling of the error, which connected with optical density of components culture medium related with the plane-table. The value of optical density of control small hole (sterile culture medium) was taken away from results of experience tests. Were find out that capacity of isolates of S. аureus for forming of biofilm were different. Index of optical density of S. аureus, isolated from patients, was within the limits of 0,068 to 0,297 and 10,6 % % strains had weak ability to form biofilm, 60,7 % had medium ability for this and 28,7 % had a high ability. These data testify that all investigated cultures of S. aureus showed mainly a high and middle ability to from biofilm. The highest index of forming biofilm was at the strains received by the objects of environment, that in 1,9 time exceeded the analogical index of strains, received by clinical material from patients, and in 1,7 time – strains, re- ceived by the medical staff (р < 0,05). Index of optical density of S. аureus, received by hospital objects, was within the limits of 0,102 to 0,375, high ability to form biofilms were 53,2 % Index of optical density of isolates of S. aureus received by the nasopharynx of medical staff was in limits from 0,115 to 0,318, 6,7 % strains had a weak ability to form biofilm, 62,2 % had average ability, 31,1 % had a high ability for this. Our research showed that among the strains describe above high ability have the strains received by the objects of environment. Possible to suppose that high ability to from biofilm of strains of S. aureus is the index of pathoge- nicity during long persistence of this pathogen in an environment. 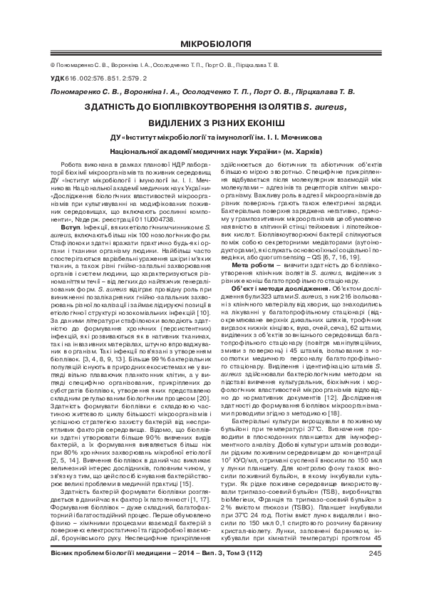