It has been investigated an influence of ginkgo biloba leaf extract on histological and ultrastructural changes in testes among drunken rats. These experimental findings show a positive effect of correction of spermatogenesis with drug mentioned above, which stimulates restorative processes not only in the convoluted seminiferous tubules but in the interstitial endocrinocytes and in the components of the blood-testes barrier. Despite the positive dynamics of indexes complete normalization of ultrastructure of the testes is not observed by a specified date. Scientific research has been conducted according to the research plan of Vasyl Stefanyk Precarpathian National University and is a part of research theme of the department of Human Anatomy and Physiology “Morphofunctional State of Blood Channels and Elements of Gonadal Tissue in the Human Male under the Influence of Pathogenic Factors” (registration number 0105U009082). Infertility is a relevant problem and a significant social concern and in case of infertile couples the male factor is responsible for about 35 % of cases. Among the ethiopathogenetic factors that induce male infertility and impotence alcohol intoxication plays an important role. In pathogenesis of alcohol-induced hypogonadism vascular condition is of great importance, and taking into account the vasoprotective properties of ginkgo biloba leaf extract in treatment of disorders of blood supply to organs and tissues the research goal was to discover corrective properties of plants on the spermatogenetic and endocrine function of the testes. The experiments have been conducted on 42 sexually mature male rats each about 150-180 grams in weight. Maintenance of rats and testing on them have been performed according to “The Ethical Principles and Guidelines for Experiments on Animals” approved by the National congress of bioethics (2001). Any offence against moral and ethical principles hasn’t been detected by Commission on bioethics of Vasyl Stefanyk Precarpathian National University while conducting scientific research (meeting minutes №1 held on Tuesday, 04 February 2014). The animals have been injected intragastrically with a 30 % ethanol solution in the amount of 2 ml. per 100 gram body weight and with ginkgo biloba leaf extract in dosage of 0.5 ml. per 1 kilogram of body weight during the 7th, 14th and 21st day. Histological and submicroscopic changes in the testes have been examined at the same time. In histological examination of testicular tissue the diameter of the convoluted seminiferous tubules, the extent of seminiferous epithelium cells damage at the stage IV of the seminiferous epithelium cycle, nuclear volume of interstitial endocrinocytes have been discovered. Ultrastructural changes in the testis have been examined with a transmission electron microscope (125 kV TEM). Statistical analysis of morphometric measurements has been done using computer program STATISTICA for Windows ®, pairwise comparison has been made with methods of nonparametric analysis using the Mann- Whitney U-test. The difference between indicators has been considered to be reliable when p was below 0. 05. On the 7th day of the experiment any expected changes in the structure of the testes haven’t been detected. On the 14th day of the experiment 79.3 % of the convoluted seminiferous tubules have had normal structure whilst among drunken rats 67.2 % of the convoluted seminiferous tubules have developed some structural abnormality without using a corrector. The number of spermatocytes and spermatids in stage 7 has increased to 251,20 ± 3,18 and 858,06 ± 3,74 at the pachytene stage in comparison with 201,24 ± 6,47 and 790,57 ± 11,61 accordingly in the animals without any correction of spermatogenesis. However, indicators mentioned above were lower compared to indicators of a control group (286,73 ± 3,21 and 912,71 ± 15,65 correspondingly). On the 21st day of the experiment the amount of spermatocytes in the convoluted seminiferous tubules at the pachytene stage has been 240,45 ± 2,67 and the number of spermatids in stage 7 has counted 789,50 ± 4,30 accordingly. According to electron microscopy evidences in the 14th and 21st day after the alcoholization and using ginkgo biloba leaf extract the vacuolization of endotheliocyte cytoplasm has been observed in the animal testis. Some invaginations have been identified in nuclei, mitochondria has had cleared intercellular matrix and a number of mitochondrial crests has been lower. The endoplasmic reticulum tubules and Golgi apparatus tubules have become widened. In nuclei of myoid cells perinuclear localization of chromatin has been found, contours of nucleolemma have been irregular, the reduction of microfilaments has been identified in cytoplasm, the ER cisternae and the Golgi apparatus cisternae have become widened, the mitochondrial matrix has been cleared, a number of the mitochondrial crests has reduced. The nuclei of supportive epithelial cells have been cleared, the cytoplasmic electron density has decreased, the mitochondrial matrix has been vacuolated, the mitochondrial crests have become partially reduced, and the ER lumen and the lumen of the Golgi apparatus have become widened. The reduction of microfilaments and the widening of the ER cisternae have been identified in the connective apparatus. The nuclear membrane folding, clearing of the cytoplasmic matrix, its vacuolization, deformation of the mitochondrial crests have been found in the interstitial endocrinocytes. 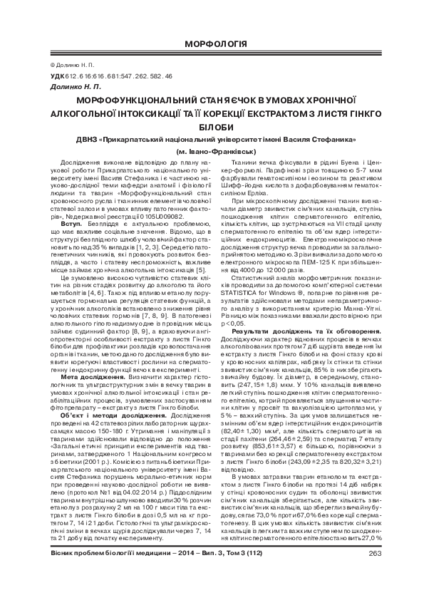