The study included 121 men with COPD (stage II-IV), smokers with experience of smoking of 18 to 58 A pack-years, in the phase of remission and control group without affecting the function of external respiration. The average age reached 73,2 ± 3,6 years. The diagnosis of COPD was established according to the criteria GOLD (2011) and the Order of the Ministry of Health of Ukraine № 555 (2013). During EhoKS-screening in the study group found that the left ventricular ejection fraction hardly differed from the control group: group 2 was 53 ± 1,6 %; Group 3 -54,5 ± 1,1 %; Group 4 – 52,5 ± 1,6 %. Pulmonary hypertension in patients with COPD did not exceed 50 mm. hg. art. However, revealed a significant increase of the cavity of the right ventricle (RV) compared to the control group. In group 2 RV cavity size is 2,8 ± 0,1 cm, group 3 – 2,9 ± 0,1 cm, Group 4 – 2,8 ± 0,2 cm. The study revealed a significant increase in aldosterone levels, as compared with the control group in all patients with COPD. Noted a correlation with the presence of aldosterone pulmonary hypertension. A significant increase in NaUP in patients with COPD, which is associated with the presence of concomitant car- diovascular disease. NaUP level correlated with the index of left ventricular ejection fraction. First show discordant changes in the regulation of sodium metabolism with increasing levels of aldosterone and NaUP in elderly patients with COPD. That іs noted at the same time with the decrease reabsorption in the proximal tubule is an increase in sodium reabsorption in the distal nephron. Thus the mechanisms of renal pathology revealed renal compensation by type tubular-tubular balance. These findings help to explain the resistance mechanisms in maintaining renal sodium balance in humans in terms of renal disease in COPD. Despite the frequency and severity of damage to the prox- imal tubules, especially in hypoxic nephropathy that occurs in COPD, renal sodium loss increases very slightly, as indicated in this paper. This ensures the stability of water-salt metabolism and finally central hemodynamics. It is noted that the tubular-tubular balance is the most important mechanism of renal physiological regulation of water-salt metabolism. It plays a role in normal and functional adaptation of the damaged kidney. Changes electrolytes serum compared with the control group, was not. The content of potassium and sodium ions meet the standards. The same applies to the content of sodium and potassium in the urine, indicating the adequacy of the compensatory mechanisms for regulation of central hemodynamics (osmotic volume regulation). Correlation analysis between the electrolytes on the one hand, and aldosterone and NaUP on the other hand were “paradoxical” that is characteristic of hypoxia in patients with COPD. 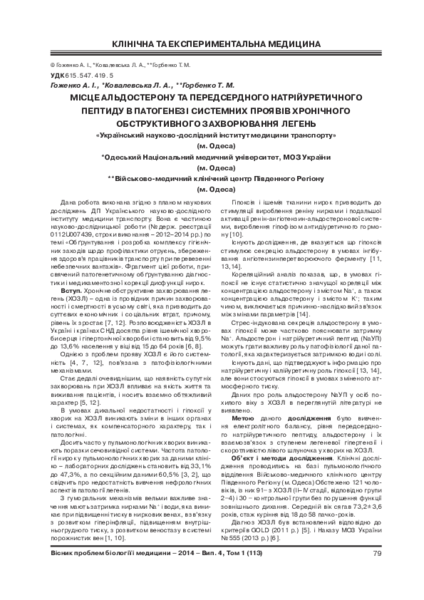