Today cardiovascular pathology remains the leading cause of morbidity and mortality of population. However, it is necessary to emphasis that in majority of European countries starting from the sixties of the last century mortality due to cardiovascular diseases (CVD) was reduced more than by 60 %, but in our country – it in- creased by 40 % and has a tendency for further growth. In the structure of mortality of population from CVD the first place is occupied by ischemic heart disease (IHD) and its most frequent sign is stable angina, which is reported in 48 % of cases. The aim of the study was to determine the dynamics of neopterin in patients with stable angina and obesity de- pending on the degree of stenosis of coronary vessels on the basis of the coronarography. Material and Methods. We examined 110 patients suffering from stable angina of II – III functional classes (FC) with concomitant obesity. The average age of the patients was 63,45 ± 1,09 years. 65 males (60,72 %) and 45 fe- males (39,28 %) were examined. The control group was composed of 20 practically healthy people. Patients suffering from stable angina with concomitant acute or chronic inflammatory diseases, renal insuffi- ciency, oncologic diseases and insulin-dependent diabetes mellitus were not involved in the investigation. All patients underwent comprehensive examination in conformity with the decree № 436 of MoH of Ukraine “Pro- tocols on delivery of medical care to the patients with IHD – stable angina”. Anthropometric measurement included measuring of height, body mass, waist circumference and hips circum- ference. Obesity was determined by IDF classification. Neopterin level was assessed by immunoenzyme methods using immunoenzyme analyzer «LabLine-90». 39 patients with diagnosed stable angina and concomitant obesity was performed coronarography. The statistical processing of results was performed with the help of software package «Statistika» (StaSoftInc, USA). The values calculated: the average (M), dispersion, standard deviation, the median (m), accuracy and level of significance (p). The standard programme of correlation analysis with calculation of average arithmetic means was used: M+m, σ, and level of accuracy (p). Pearson correlation coefficient was applied to evaluate the interaction stage between the samples (r). Conclusion. As the growth of stable angina functional class was noted a significant increase of neopterin, in- dicating the activation of cellular immune responses and can be regarded neopterin as a marker of development and progression of stable angina, due to the development of immune inflammation. Increasing stenosis due to atherosclerotic plaque installed according to coronary angiography, there was a significant increase of neopterin, indicating the degree of correlation of expression and prevalence of atherosclerotic vascular lesions and neopterin levels, which in turn allows us to consider increased neopterin as a marker of risk factor of development of complications of coronary artery disease, as evidenced by the obtained correlation. 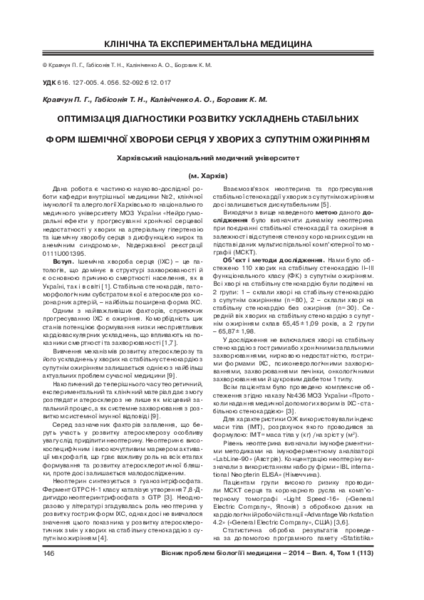