Introduction. Researches of the last years led to multivariable character of obesity. Considerable interest is caused by researches of functions of liver on condition of development and progress of obesity, which with incident to him brings in the own specific additional contribution a number of metabolic and hormonal violations to development of defeat of the hepatobiliary system. Single contradictory reports on this occasion do not allow to form a certain opinion of changes in the mechanisms of adjusting of level of choleresis and qualitative composition of bile in the background alimentary obesity. The aim of the study was to examine the liver bile formation function in the dynamics of experimental alimentary obesity. Materials and methods. Experiments were carried out on mature nonlinear white male rats. Experimental model of alimentary obesity reproduced by applying the inductor food drive – sodium salt of glutamic acid and high- calorie diet. It was measured the level of total bile acids, cholesterol and holato-cholesterol ratio, the content of total and direct bilirubin, and its degree of conjugation in the bile and the activity of ALT and AST – in blood serum. The animals were divided into three groups: control group – intact animals; first experimental group – the time of observation 14 days after the start of experiment (BMI > 25); second experimental group – 28 days after the start of the experiment (BMI > 30). Results and discussion. During our study found that in a diet-induced obesity (28 days of observation) was ob- served a statistically significant decrease the content of total bile acids in bile (by 20,72 %, p < 0,05) and increased levels of (at 155,26 %, p < 0,05). Deviations content in bile total bile acids and cholesterol resulted in a statistically significant reduction of holato-cholesterol ratio in 28 days after the start of the experiment (at 68,42 %, p < 0,05). Established that in 14 days from the beginning of the observation does not change the content in bile total bile acids and cholesterol, were not observing the deviations of holato-holesterol ratio. The content of total and direct bilirubin, and its degree of conjugation in 14 days of observation were not signifi- cantly changed in relation to the control group (p > 0,05). At the same time, in the second experimental group (28 days of observation) was observed increase in the content of direct bilirubin in bile at 28,79 %, which was statisti- cally significant (p < 0,05) and caused a rise in the degree of conjugation of bilirubin (at 14,55 %, p < 0,05). Under the experimental diet-induced obesity also found violations of enzyme metabolism, particularly ALT during the observation statistically significantly decreased in liver homogenate, but increased in blood serum (p < 0,05). Also installing growth of the AST in liver homogenate at 25. 00 % in the first experimental group and 40,91 % – in the second group according to control (p < 0,05), accompanied by a statistically significant decrease in the activity of the studied parameters to 43,14 % after 28 days of the experiment. Conclusions. Violation of bile producing function of liver in rats provided diets obesity-induced change appears biochemical properties of bile, which is primarily characterized by increased content of cholesterol, the reduction of amount bile acids and increase in holato-holesterol ratio in bile. Violation enzyme metabolism in experimental alimentary obesity is associated with liver involvement in the pathological process that is accompanied by increased permeability of cell membranes, accompanied by increased activity of AST in liver homogenate and promotes the release of ALT cell structures in the blood. 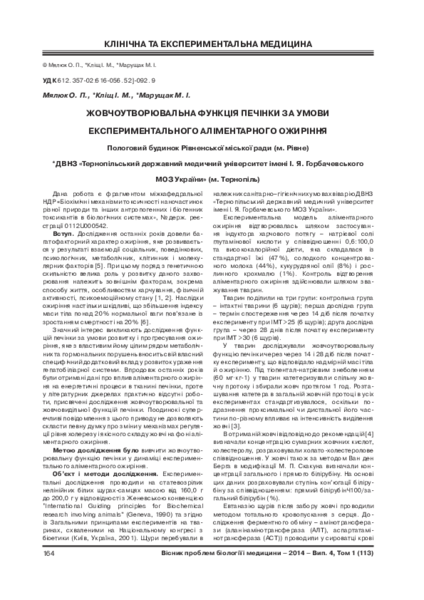