Bulletin of problems biology and medicine / Issue 4 part 1 (113), 2014 / Approaches to Formation of the Genetic Forecast of Development of Multifactorial Diseases
Fedota A. M.

Introduction. An important form of prevention of multifactorial diseases is the formation of groups at risk for a genetic counseling, primary prevention and clinical examination. Estimates of recurrent or repeated risk of diseases including the genodermatoses can be calculated based on the population frequencies and risk groups can be formed. Predict the onset of the disease in the offspring in a certain age range is possible by age of onset of pathology parent. The relative risk of developing the disease in carriers of different genotypes to prevention is calculated based on the results of molecular genetic studies of susceptibility genes. The genetic characteristics, derived from the analysis on population, family and individual levels, can be used to develop the genetic prognosis of multifactorial diseases, as illustrated in this paper on the example of psoriasis. Materials and methods. The calculation of prevalence, cumulative incidence, population frequencies had been carried out. Segregation frequencies and their statistical errors, the estimates of the recurrence risk had been cal- culated. Prediction of the age of onset of psoriasis on the parent performed using the results of the regression analysis. The relative risk and confidence intervals were calculated on the basis of molecular genetic analysis. Results of the study. The tables of the recurrence risk can estimate the risk of developing the disease in their lifetime in the consulting, taking into account gender, form of the disease, the presence of the sick and the healthy parents and siblings. So, if a male proband’s father has the same form of psoriasis, the chances are that the father of the proband next child (sibling of the proband) is ill – 14,7-16,1 %. Chance for proband have a sick child – 0. 8 %. Perhaps sibling has not yet lived up to the average age of onset of the disease, the same applies to the future children of the proband. The values of the regression coefficients for age at onset of psoriasis population of Eastern Ukraine show that the prognosis for the child will be more accurate in the mother than to his father that he is obvi- ously connected with the phenomenon of “maternal effect”. For parents in general more accurately determine the age of onset for the son than a daughter. Prognostically more important is the age of onset of the disease for the mother’s son than a daughter. For example, if the spread of psoriasis in a woman who has a son, has manifested in 45 years, then the linear regression equation for the type of related pairs of “mother-son” critical age at onset of psoriasis son – 34. 3 years, according to the equation “mother-child” – 33. 8 years, according to the equation “parent-son” – 32. 4, according to the equation “parent-child” – 28. 8. By gene network psoriasis include multiple genes, one of which is a gene MTHFR (OMIM 607093). Calculation of the relative risk of psoriasis showed that the relative risk of developing psoriasis for heterozygotes CT by polymorphic variant C677T of MTHFR gene above 2 times than carriers of other genotypes. Conclusions. The results of various kinds of genetic analysis, population, family, molecular, allows creating a risk of developing the disease, to predict the age range of onset, choose the strategy of prevention. 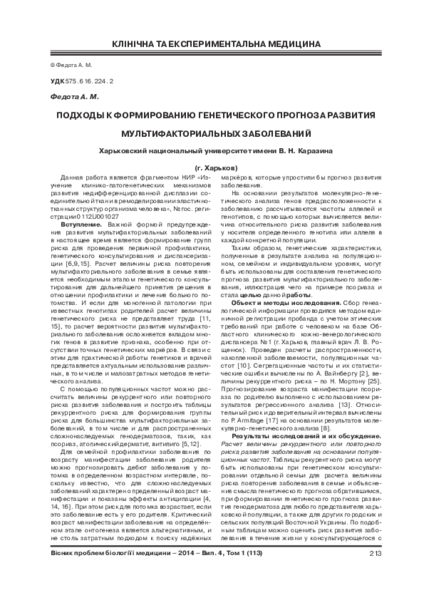