Thyroid cancer (TC) is less than 1 % of all cases of cancer human pathology, but is considered one of the most common endocrine neoplasia. Effects of ionizing radiation (IR) is a verified factor in thyroid carcinogenesis, especially at a young age; also confirmed the connection of nutritional iodine deficiency with this disease. In recent years, several common low-penetrance genes that cause susceptibility to cancer were identified. The special place among those genes belongs to DNA reparation genes, which included XPD gene. The XPD gene product (xeroderma pigmentosum group D) functions as an auxiliary factor of RNA polymerase II. XPD protein is involved in transcription-coupled nucleotide excision repair. The carriage of polymorphic alleles of this gene increases the risk of breast cancer [8], laryngeal cancer [7], lung cancer [1]. According to the results of a meta-analysis Qiu L. et al. [8] conclude that XPD gene is low-penetrance risk factor for breast cancer. S. N. Silva et al. found, that polymorphic variants of XPD gene associated with increased risk of papillary thyroid cancer, but further studies are needed to confirm these results [11]. The aim of this work is to establish the relationship of polymorphism Lys751Gln of DNA repair gene XPD with the risk of thyroid cancer in patients without exposure to ionizing radiation in history. Materials and methods. The genotyping of polymorphism Lys751Gln of gene XPD was carried out in 64 patients with thyroid cancer without ionizing radiation history – 14 men (22 %) and 50 women (78 %) aged 14 to 78 years. For comparison of the data on spontaneous thyroid cancer and settlement of allele frequencies differences and risk of cancer pathology we used literature data on control groups of Polish populations [12, 6]. In assessing the risks of XPD polymorphism – literature data on the Polish population without cancer pathology (36 men and 64 women). PCR was performed in a final volume of 20 ml, containing approximately 20 ng of DNA studied, 10. 0 pmol of each primer, using the buffer provided by the manufacturer. The determining of polymorphic alleles frequency and genotypes distribution was assessed according for Hardy-Weinberg equation. Results and Discussion. We found that in the study group value of homozygotes for major allele, heterozygotes and homozygotes for the minor allele is 31. 24 %, 59. 38 % and 9. 38 %. V allele frequency was 0,39 (χ2 3,91, p < 0. 05). The distribution of genotype frequencies in the study group of patients with thyroid cancer without exposure to ionizing radiation in history was compared with literature data in three groups: from Poland (group of individuals without cancer pathology), and in two groups of healthy individuals from the UK and Sweden. We have not found differences in the distribution of genotype frequencies comparing the study group of patients with thyroid cancer and a group of individuals without cancer pathology from Poland and groups of healthy individuals from Sweden and the UK. Among patients with thyroid cancer without ionizing radiation in history distribution of genotypes probably did not meet Hardy-Weinberg equation. It should be noted, that the values obtained χ2 = 3,91 on the verge of critical χ2 = 3. 84, so the discrepancy found may be random. The basic factor of disparity of genotypes distribution to Hardy-Weinberg equation can be a greater amount of heterozygotes at proportionally less amount of homozygotes of both types in an study group. Conclusions. There was found no association of polymorphisms Lys751Gl of the gene XPD with the risk of spontaneous thyroid cancer in patients with thyroid cancer. The obtained results for the distribution of genotypes frequencies of XPD gene in patients with thyroid cancer are consistent with the compared literature data on the distribution of genotypes frequency of XPD gene in European populations. Exactly this can be a basis of the adequacy of the conducted calculations in the first stage of work, because as a control group were selected results of research of the Polish population. 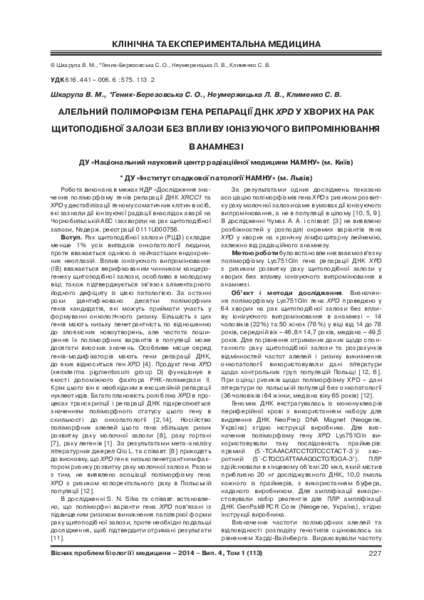