Bulletin of problems biology and medicine / Issue 4 part 1 (113), 2014 / Spectrum of Microflora of the Upper Air Passages in People who are Overweight
Lytvynenko O. A., Osolodchenko T. P., Kuchma I. Y.

In the majority of the developed countries of Europe 15 to 25 % of the adult population suffer from obesity and that is the leading risk factor for hypertension, ischemic heart disease, cerebrovascular disease and so on. Patients who are overweight have an increased risk of the developing of type 2 diabetes and dislipidemy. Clinical and epidemiological data show an increase in the incidence and severity of infectious diseases in people who are overweight. The presence of abdominal visceral obesity may be considered as a risk factor of complications and a longer course of acute respiratory disease, susceptibility to the formation of complications mainly from the lower respiratory tract (bronchitis, pneumonia). The composition of the microflora of different biotopes in patients with obesity and its biological properties and effects on makroorganism is currently understudied and requires more detailed investigation. The work objective is to study the microecology of upper respiratory tract (oropharynx, nose) in patients with various degrees of obesity and concomitant cardiovascular disease. The study involved 71 people aged 27 to 71 years, who are under medical supervision in Communal Health Protection Institution “Kharkiv City Hospital #13. ” The mean age of the group was 52,9 + 1,09 years. Among the patients who were examined 46 people showed first-degree obesity, which is 64. 7 %, 18 people showed second- degree obesity, which is 25,3 % and 7 people showed third-degree obesity, which is 9. 8 %. The analysis of comorbidity shows that 21 patients have essential hypertension (EH), which is 29,57 %. IHD in combination with EH was also diagnosed in 21 patients, which also respectively makes 29,57 %. 6 patients (8,45 %) showed type 2 diabetes, 5 patients (7,04 %) showed different stages of dyscirculatory encephalopathy, 7 patients (9,85 %) showed vegetative-vascular dystonia. 19 people had no pathology in addition to obesity. The control group consisted of 36 healthy individuals aged 37 to 62 years, mean age 50,63 + 1,06 years. The material for microbiology investigation was clinical material taken from the nasal mucosa. We have found that the percentage of opportunistic microorganisms taken from the mucous of the upper air passages is significantly greater in patients with obesity than in the control group. The detection of S. aureus in oropharynx mucosa is nearly three times as common, and the detection of S. aureus in nasal mucosa is four times as common in patients with obesity as in the control group. Such microorganisms as P. aeruginosa, Enterococcus spp., P. vulgaris were detected in patients with obesity, and they were not observed in the control group. The sharp increase of candidiasis is noteworthy in people who are overweight: 49,2 % in patients with obesity, compared with 5,5 % in healthy people. The link is noted between cardiovascular disease and an increased number of carriers of opportunistic pathogenic microflora. Thus, patients who are overweight, with no comorbidity of cardiovascular system and patients with essential hypertension are not significantly different by the percentage of the emission of microorganisms. However, in patients with obesity and ischemic heart disease the emission of microorganisms significantly increased. For example, the amount of emission of S. aureus increased 2,5-3-fold, the amount of Enterococcus spp. and Candida spp. increased 2-fold. That can indirectly indicate significant immunosuppression in this group of patients. A significant increase in antibiotic resistance in the microflora of the patients with concomitant IHD should be also noted. 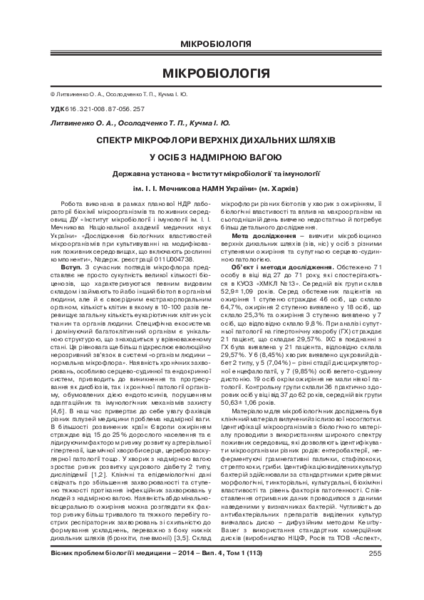