Therapy of genitourinary system diseases caused by harmful environmental factors, including EMF, takes special place among the medico-biological problems. The number of people with such kind of pathology grows. Furthermore, underdevelopment of men’s reproductive system has straight influence on their physical and emotional health. Investigators have proved that the harmful influence of environment, including EMF, on internal genital organs may cause infertility, that puts this issue in a number of top-issues of modern surgery. The author sets a goal of determining the electronomicroscopic changes that happens in rats’ testicles after long-term high-voltage EMF influence and using the immunomodulator – Echinacea purpurea tincture. The experiment of studying the influence of electromagnetic networks with tension 330 kV on animals was per- formed at the substation “Dnipropetrovsk” of Dnipropetrovsk region. Male rats (35 animals) were at a height of 1. 7 m above the ground level, radiated with EMF of 330 kV voltage, 50 Hz frequency, 1. 5 hours five days a week for 4 months. Then irradiated males were given intragastric infusion of Echinacea purpurea. After removal of the testes from animals, testis tissues were processed by special technique and have been researched with the electronic microscope EM-125 of Sumy production association “Electron” (Ukraine). The author obtained following results: clearance between Leidig’s cells and visceral endothelium of blood ves- sels was filled with bundles of collagen fibers. Between the neighboring endotheliocytes overlapping contacts were found, often with complex configuration. Testicular parenchyma included sinuous seminal tubules diameter (232 ± 0,29 mcm) was significantly greater than in control. In the seminiferous tubules appeared an increase in the number of lipid granules in the supporting cells. In histological preparations of this series of experiments appeared the proliferation of connective tissue volume density of which reached numbers of 0,295 ± 0,005 cu (p < 0. 05). In- terstitial endocrinocytes were located in the interstitium by groups of 7-12 cells around blood vessels and were the “closed” type interstitium, as they were surrounded by a continuous monolayer of lymphatic endothelium. Endothe- lial cells contained oval nucleus, nucleolus and cytoplasm, organelles of which were mostly located in paranuclear area. Long processes of endotheliocytes contained many large micro-pinocytosis vesicles, often forming through apertures in the elements of the cytoskeleton of cells. The researcher found that since the middle of the experiment, i. e. from 60th to 120th day of observation came the second phase of morphological changes in the testes – compensatory-adaptational, that was manifested in the gradual expansion of intraorganic bloodstream capacity of testis, increase of vesiculation of circulatory en- dothelium without development of its cell proliferation. Proliferation and hypertrophy were found among interstitial endocrinocytes; also was noticed lymphoid-histiocytic infiltration of the seminal gland stroma, activation of sper- matogenesis, which manifested itself in the appearance of more spermatozoons. Reported morphological features of the endocrine system and intraorganic blood and lymphatic channels of testes at 120-day length of electromagnetic radiation are showing compensatory androgenic hyperfunction. 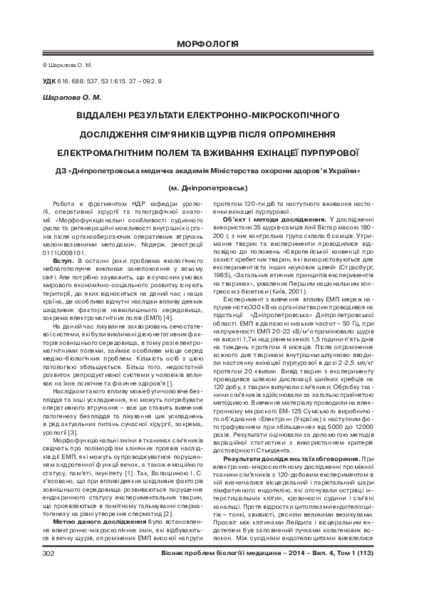