Research objective – to study in clinic morfo-functional features of pancreas in relation to stage of fibrous transformation during chronic pancreatitis. Object and research methods. The analysis of morphological and biochemical indicators depending on extent of fibrous transformation at 66 operated patients with chronic pancreatitis complications formed a basis of this re- search. Among the surveyed men was 58 (87,8 %), and women – 8 (12,2 %) which age was from 26 to 70 years, on the average (45,6 ± 1,62) years. Morpho-functional features of pancreas was studied in 66 patients with complicated chronic pancreatitis (CP), depending on degree of fibrous transformation of pancreas tissue as has been established morphologically dur- ing analysis of bioptats which have been obtained during surgery. It has been found that at the I degree of fibro- sis in pancreas fibrous tissue occupy (11,18 ± 4,10) %, exocrine – (85,23 ± 6,59) %, at II – (29,97 ± 2,95) % and (63,33 ± 4,57) %, at ІІI – (68,36 ± 2,14) % and (25,98 ± 2,08) %, and at ІV – (77,69 ± 4,53) % and (2,36 ± 0,64) % re- spectively. At ІІІ and ІV degree of fibrous transformation of pancreas changes in acinary tissue were accompa- nied by development of fatty dystrophy (25,7 % and 66,7 % of cases respectively), up to full fatty degeneration of pancreas (7,6 % of cases). Fibrous transformation of pancreas in cases of complicated CP was biochemically ac- companied by: intensification of free radical oxidation of lipids (increase in malone dialdehyd concentration by 1,7 times (p < 0,001)); endogenous intoxication (increase in concentration of average weight molecules by 1,7 times (p < 0,001)); disorders of exocrine function of pancreas; prevalence of synthesis of collagen (increase in the con- tents protein-connected oxyproline by 1,4 times (p < 0,001) and hyaluronic acid by 2,3 times (p < 0,001)) over its disintegration (decrease in the contents of free oxyproline by 1,7 times (p < 0,05)); signs of cholestasis (increase in the content of bile acids by 1,4 times (p < 0,05), X-lipoprotein by 1,8 times (p < 0,01) and gamma glutamyl trans- peptidase by 3,9 times (p > 0,05)); disorder of a carbohydrate exchange (increase in concentration of glycosylated hemoglobin by 1,4 times (p < 0,05)). The analysis of structural changes in pancreas under the conditions of fibrous transformation showed that the compression of nervous trunks at ІІ degree of fibrosis is caused by signs of a perineural infiltration which consists of focal congestions of the neutrophilic granulocytes (an active inflammation). At the III degree of fibrosis the compression of nervous trunks is more often caused by the perineural infiltration presented by lymphocytes and plasmocytes that is more indicative for an inactive inflammation, and at the IV de- gree – the compression of nervous trunks is caused by expanding connective tissue. After obtained data had subjected to statistic analysis, direct link (r = 0,591; p = 0,001) has been found between the diffuse and perineural infiltration. The correlation analysis also confirmed existence of strong link between fibro- sis degree according to M. Stolte and the relative area of acinar tissue (r = -0,83; p < 0,05), along with the direct link between degree of fibrosis and relative area of connective tissue (r = 0,71; p < 0,05). Reverse correlation was also detected between development of fatty dystrophy and relative area of acinar tissue (r = -0,48; p = 0,002), and also between development of fatty dystrophy and inflammation (r = -0,44; p = 0,01). 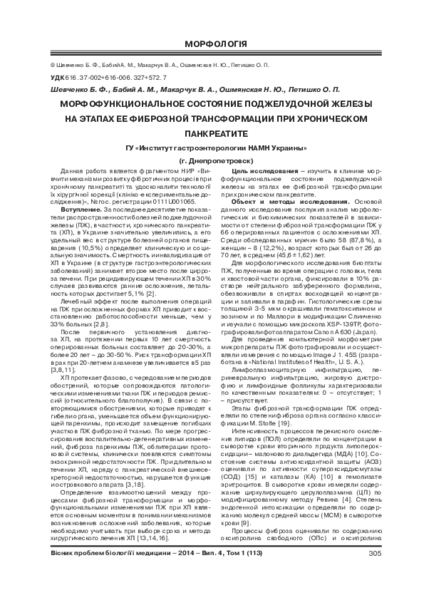