Bulletin of problems biology and medicine / Issue 4 part 1 (113), 2014 / Comparative Analysis of Component Structure of Human Body Weight at the Stages of Postnatal On- togenesis: Age and Gender Relationships
Shklyar A. S.


Comparative Analysis of Component Structure of Human Body Weight at the Stages of Postnatal On- togenesis: Age and Gender Relationships

The purpose of the research was aimed at comparative study of body-build habits (component structure of body weight) at the stages of ontogenesis of multiple human gender groups. Materials and Methods. The results of direct anthropometry of individuals, stratified according to characteristic of ontogenetic period, comprised the material for study. Anthropometric study has been carried out according to the V. V. Bunak’s diagram. Accumulated results constituted the reference data base, which developed results were the basis for statistical analysis, fragment of which is presented in the paper, as well as in number of innovation de- velopments. Estimation of lipid, muscle and osseous components of the body weight has been presented. Results and Discussion. Data analysis has shown that gender distinctions in the rate of ontogenetically dis- harmonic muscle component of body weight are not found; however, the rate of such male individuals in multiple ontogenetic groups accounted for 13,8 ± 1,3%, and varied from 8,9 ± 2,0% in ontogenetic Group VI to 20,2 ± 3,8% in ontogenetic Group IX. The rate of ontogenetically disharmonic lipid component of body weight according to ana- lyzed ontogenetic periods varied from 11,0 ± 1,6% to 30,0 ± 3,0%, comprising on the average 15,4 ± 1,0%. Among the male individuals the lowest rate of body weight disharmony on its lipid component has been revealed in the period of second childhood and accounted for 8,4 ± 1,8%, and the highest one was 33,3 ± 4,4% in the period of mature age. Among the female individuals the highest rate of body weight disharmony on its lipid component has been revealed in the first period of mature age and accounted for 26,7 ± 4,1%, whereas in the previous ontogenetic period this index was relatively stable and didn’t significantly differ, depending on age. The rate of ontogenetically disharmonic osseous component was significantly (р<0,01) higher among the male individuals in the ontogenetic periods VI and VII, whereas in pre-adult age the rate of disharmonic variants among male and female individuals didn’t significantly differ. It is noticeable that the high rate of disharmonic osseous component has been revealed among female and male individuals in the first period of mature age (25,0 ± 4,0% and 10,5 ± 2,9%, respectively; р<0,001). Conclusions. The direct anthropometry has revealed the mechanisms of component structure of body weight formation at the stages of postnatal ontogenesis, which became apparent by different rate of disharmonic types, first of all in comparative aspect of ontogenesis of gender groups. The results of generalized development of accumulated anthropometric data have defined the directions of de- velopment of conventional anthropometry methodology, grounded innovation technique, in particular, and provided with estimation of ontogenetically disharmonic body-build by the body weight components. Estimation of ontogenetic disharmony of osseous, muscle and lipid components of body weight is assigned to anatomy, topographic anatomy and other clinical disciplines, and can be used for consideration of specific features of the body-build. The obtained results can be used to explain age differences in the rate of formation of functional disorders, prenosological, as well as nosologically defined pathological conditions as manifestations of general process of growth and development in postnatal ontogenesis. 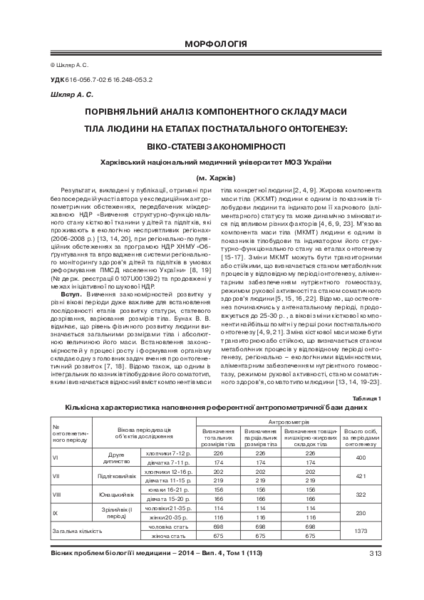