Evaluation of Catering for Schoolchildren Studied at Boarding Schools

Children’s health care is one of the priority guidelines of state and society activity. Nutrition is the leading environmental factor that has an impact on growth, development and health formation of children. Adequate nutrition is essential and permanent factor that provides adequate processes of growth and develop- ment of the child’s body, as well as health strengthening in childhood and adolescence. Unbalanced diet is one of the leading risk factors for state of health deviations development in children that can further lead to the formation of somatic pathology. The analysis of resent findings in the field of feeding trends in children’s nutrition in Ukraine shows that it mostly depends on economic welfare of the family, level of parents’ hygienic education. Feeding trends and quality of children at boarding schools depends on nation’s opportunities. Recently the scientific aspects of ca- tering for schoolchildren at boarding schools are of great medical and social importance. The paper considers solving the problem of catering for schoolchildren at comprehensive boarding schools. The method of calculations of boarding schools’ menus has been used during the evaluation. The frequency of es- sential food consumption in the ration of children from the investigated group (10-13 years old) has been studied. All meals prepared during a day have been listed in each menu with indication of amount of food, used for cooking. The amount of food, used for cooking, has been estimated according to food standards. The paper studied and analyzed the frequency of essential food consumption in the ration of children, aged from 10 to 13 years old, during 9 months period in 2013 (the research did not performed during the vacation). All children at boarding school are fed four times a day, regardless of age. The analysis of menus at boarding school showed that meals were not the same during a day and a week. The ratio of ration’s distribution according to feeding is accounted for four times a day. The results showed that children at boarding school have a diverse complete daily ration, including basic neces- sary food (hot cereal, meat courses, dairy products, butter, pasta, juices). While analyzing the obtained results it should be mentioned that on the average during a year there is a lack of meat products in ration of children at boarding schools, accounted for 7 % less the rate; however, fish and fish products are in sufficient amount and even more of the established rates (greater than 18 %); butter consumption is within the rate. Milk and dairy products are consumed by children 25 % less the rate, which is partially compensated by consumption of cultured milk foods and hard cheese (greater than 27 %). Consumption of rye bread is not suf- ficient, though it is compensated by consumption of white bread. Cereals, legumes and pasta are consumed within the rates, similar to confectionery. The reduced consumption of juices and fresh vegetables in the form of salads has been also observed; fresh fruit and citrus are available in sufficient amount in the ration. It should be noted that the average set of basic foodstuff for children at boarding schools somehow varies from season to season during a year. Consequently, consumption of fresh vegetables and fruit is the lowest in winter and the highest in spring; consumption of juices, on the contrary, is increased in winter. Regarding the meat prod- ucts, they are least consumed in winter, whereas consumption of fish and fish products are increasing at this time. Cheese, butter, cereals, pasta and confectionery are consumed, generally, at equal amount in different seasons of the year. Conclusions. The results of the analysis of catering for schoolchildren at boarding schools have established that: - the ration of children at boarding school is diverse and contains full spectrum of necessary foodstuff; - the ration of children at boarding school is insufficient in terms of meat and meat products, milk and dairy prod- ucts (as compared with approved food standards); - cereals, legumes and pasta are consumed in sufficient amount; - insufficient consumption of juices and fresh vegetables in the form of salads is observed; - average daily set of basic foodstuff for boarding school children varies from season to season. 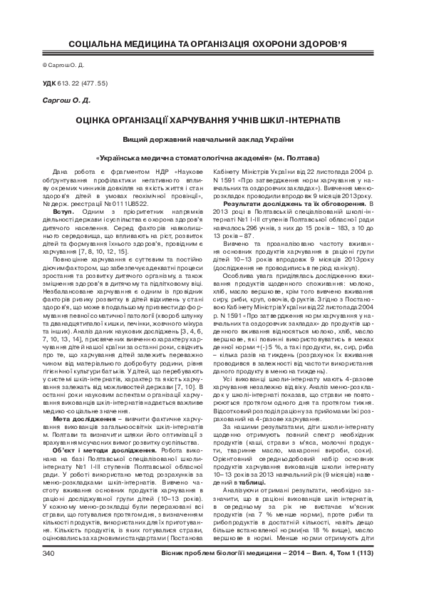