EFFICACY EMOLLIENTS TO RESTORE SKIN IN PEOPLE WHO ABUSE UV

The priorities of regenerative medicine is the reduction of the incidence of dermatological diseases, support for high quality of life, correction of aging skin changes due to a biological processes of aging and various endogenous or exogenous causes (UV radiation). Small doses of UV radiation necessary for human life (the synthesis of vitamin D and calcium metabolism, lack of UV - radiation can exacerbate certain skin diseases). However, excessive UV - radiation has on the skin damaging effect (burn, skin thickening and malignant degeneration of cells). The circle of supporters sun and artificial tanning regularly distributed in connection with the «fashionable» trend now, especially among young people. Nowadays a tan is a sign of health and beauty, but in terms of medicine is a skin reaction to damage from exposure to UV radiation, so health surveillance, investigation of changes of the skin and their correction in patients who are under prolonged exposure to low doses of ionizing radiation is very relevant. The aim of our study was to investigate morphological changes of the skin of "fans" of sun and artificial tanning and efficacy of emollients for skin renewal in this population. We examined 32 people from 15 to 28 years (22 women and 10 men) who abused and artificial solar radiation at leas 3 years. All we surveyed were divided into two groups. In the first group included 24 people, who, along with the traditional treatment of skin smeared 2 times a day emollients - emulsion LIPIKAR from La Roche-Posay, France), which has action immediately absorbed in dry skin for a long time strengthens the skin barrier and protects it from harsh external factors. Due component niacinamide, reduced skin barrier and reduces the feeling of tightness, shea butter nourishes the skin with fatty acids, which restore the lipid film, and sterols have a calming effect. The second group (8 people) - used traditional methods of treatment. Definition of thermoregulation of the skin was performed by measuring the temperature in the symmetric zone by thermography method. Skin barrier function was evaluated pH – measuring. We found that the changes in temperature reaction marked on parts of the body examined that are more exposed to UV - radiation. This is confirmed by computer thermography that revealed excessive thermoset type in 28% of patients (p <0.05), inert - in 18.8% of «fans». Microfluorimetry found increased permeability of the epidermis as increased sweating reduces the acidity of the skin surface parallel growth of contamination by microorganisms. We found that the total number of patients and the group treated with emulsion LIPIKAR improvement was observed in 2 days of treatment, along with those in the second group positive trend was observed for 4 days disappeared vascular mesh, spots, typical of photoaging, duration of treatment and the group was an average of 10 ± 1 days, while the comparison group 13 ± 1 days. Thus, the need to increase the awareness of the population (particularly young people) about the harmful effects of sun and UV radiation, warn public of «fashion» is tan and recommend the use of emollients, in our case, hypoallergenic humidifying emulsion LIPIKAR, after a long stay in the sun in the solarium. 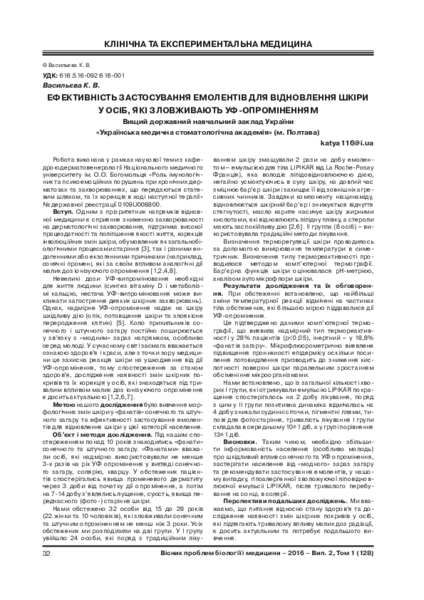