CARDIOVASCULAR DISEASE ASSOCIATED WITH OSTEOPOROSIS AS A POLYMORBIDITY PROBLEM

Osteoporosis (ОР) and atherosclerosis, the effects of which are respectively skeletal fractures and cardiovascular catastrophe — the most frequent causes of reduced quality of life and mortality in persons older than 50 years. Older women are characterized by polymorbidity, namely osteoporosis in associated with cardiovascular pathology. This justifies the advisability to study the mechanisms of syntropy and elaborate non-invasive diagnostic methods of vascular lesions and differential therapy. Objective: To study the features of osteoporosis associated with cardiovascular pathology in postmenopausal women. Object and methods. We screened the women aged 50 to 69 years (average age was 63,4 ± 3,7 years). All patients were divided into the following groups: I group (n = 23) — persons who do not have osteoporosis by ultrasound densitometry; the second group (n = 19) – patients with osteopenia according ultrasound densitometry, III group (n = 29) — patients in whom osteoporosis confirmed by ultrasound densitometry data. Determining the thickness of the intima-media (TIM) performed on the "Toshiba Nemio" device in B-mode. In conducting ultrasound densitometry assessed changes in BMD within one standard deviation (SD). Measurement of central blood pressure and arterial stiffness parameters were performed using the Sphygmocor system (ArtCor, Australia). Pulse wave velocity in the aorta was measured by pulse wave consistent registration on carotid and femoral arteries while recording ECG. Was conducted mathematical and statistical analysis to prove the reliability of the results. Results and discussion. Groups of patients were representative by the age, but different by duration of menopause. Patients of the first group had a menopause 11,23 ± 2,17 years, in the second group — 13,54 ± 3,84 years, the third group — 16,8 ± 3,9 years. A detailed analysis of blood pressure showed that the systolic blood pressure (SBP) was more than 1.3 times higher (p < 0.05) and diastolic blood pressure (DBP) was average 1.2 times higher in the second group, and 1.4 (p < 0.02) and 1.3 (p < 0.02) times higher in III group compared to the comparison group. Arterial hypertension III stage was in 13.04 % of patients II group and 36% of patients III group. The study of the vascular wall in comorbid patients found that in patients of the II group the intima-media thickness (IMT) index on the bifurcation of the common carotid artery was 1.4 times (p <0.01) higher. In the III group was found the increasing of IMT on the bifurcation of the common carotid artery 1.6 times (p <0.01) in comparison with control group. Definition speed of the pulse wave, which is the hardness vessels gold standard, showed that it was higher 1.8 times (p <0.001) in the second group and 2.4 times (p <0.001) in the third group in comparison with first control group. Ultrasound densitometry showed that the bone mineral density (BMD) T-test in the first group was 0,62 ± 0,29 SD, in the second group was 1,9 ± 0,49 SD and in the third group was 3,15 ± 0,38 SD. The study found a direct correlation between pulse wave velocity (PWV) and BMD (r = + 0,69; p <0,01). And it was reliably established a highly highly sensitivity of PWV data in compared to IMT. In patients with osteopenia and osteoporosis data of atherogenic dyslipidemia was increased and established a strong negative correlation between total cholesterol indices and BMD (r = -0,71; p <0,01). Conclusions. The osteoporosis and cardiovascular disease comorbidity enhance bone resorption, reduce the elasticity of blood vessels, increase atherosclerotic process in the vascular wall and calcification of blood vessels, which leads to the increasing of the frequency and intensity of cardiovascular diseases in patients with osteoporosis. 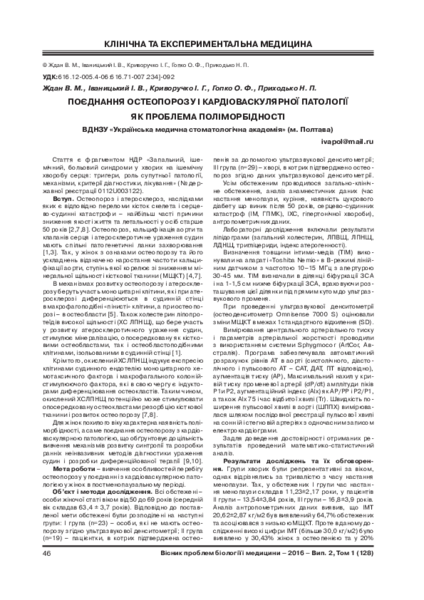