Bulletin of problems biology and medicine / Issue 2 part 1 (128), 2016 / INFLUENCE OF THIOPENTAL SODIUM ON ENERGY METABOLISM IN THE BRAIN
Makarenko A. N., Savosko S. I.


INFLUENCE OF THIOPENTAL SODIUM ON ENERGY METABOLISM IN THE BRAIN

The paper investigated the effects of anesthesia on the biochemical parameters of energy state in the brain tissue of rats at different time period after injection of sodium thiopental. The study was carried out on 45 male albino rats (body wt 225±10 g). Sodium thiopental was injected intraperitoneally (і.p.) at a dose of 30 mg/kg. After a certain time period (30 seconds; 1, 3, 10, 30 minutes; 1, 6 and 24 hours) experimental animals were decapitated. The samples of brain tissue were frozen and stored in liquid nitrogen. Tissue homogenates were prepared and centrifuged, in the supernatants were determined the level of lactate, pyruvate, and the ratio of free NAD/NADH couples. The biochemical studies were established a 3-fold increased lactate level in the brain tissue of rats after injection of sodium thiopental (p<0,01). Statistically significant differences between the time periods (30 seconds – 24 hours) have been not established. Against the high level of lactate we have set decrease pyruvate concentration. In time interval within 1-60 minutes was indicate statistically significant differences with control group, and in time interval within 6-24 hours gradual recovery of the studied index. At all time points were significantly reduced level of free NAD/NADH couples. The changed level of NAD/NADH couples was coincided with the corresponding concentration of pyruvate. The increased lactate level comparison to pyruvate concentration indicates about activation of anaerobic processes, and reduction – aerobic. Increasing the pyruvate level (30 minutes after injection of sodium thiopental) can be explained by disruption of tricarboxylic acid cycle (Krebs cycle). Increased both lactate and pyruvate levels are evidence about imbalance in anaerobic and aerobic energy processes. At long current anaerobic conditions lactate can’t be re-oxidized to pyruvate through prolonged NAD deficit. It is not excluded that the pattern formation and neutralization of free lactate in the brain tissue are realized at a different rate as compared with other tissues, particularly muscle. The increased lactate level in the brain tissue by sodium thiopental may also be a sing of suppressing glycolytic glucose cleavage and, consequently, reduced ATP production. Thus, under thiopental anesthesia we found significant deceleration of energy processes in the brain tissue of rats. There is a rapid production of lactate in the first minutes after injection of sodium thiopental and prolonged state of lactic acidosis with its predecessor utilization – pyruvate. Scientific and clinical significance results of this study concluded that the received laws confirm a numerous biochemical aspects of anesthetic action and complemented with new data relating to the recovery of the body after the state of anesthesia. 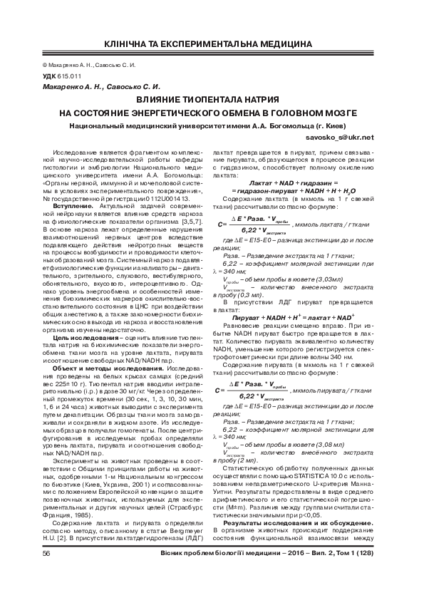