Bulletin of problems biology and medicine / Issue 2 part 1 (128), 2016 / IS THERE A CONNECTION BETWEEN THE NEUROPROTECTIVE CHOLINE ALFOSCERATE AND BIOCHEMICAL PARAMETERS UNDER THE EXPERIMENTAL CIRRHOSIS?
Manzhalii E. G., Virchenko O. V.


IS THERE A CONNECTION BETWEEN THE NEUROPROTECTIVE CHOLINE ALFOSCERATE AND BIOCHEMICAL PARAMETERS UNDER THE EXPERIMENTAL CIRRHOSIS?

Hepatic encephalopathy (НE) is a set of potentially reversible neuropsychiatric disorders that result from liver failure particularly cirrhosis. A significant prevalence and a high degree of morbidity and mortality as a result of HE cause the search of the effective treatment regimens. A standard approach to the HE treatment is to use l-ornithine-l-aspartate (larnamin), rifaximin and lactulose. However, none of these compounds is highly effective. Therefore, our attention was drawn to choline alfoscerat. In our previous clinical studies, it was observed a significant reduction of the subjective complaints of patients with HE, increasing physical activity, reducing the frequency and severity of headaches, emotional and depressive disorders, improvement of neurological symptoms (sensory and vestibular disorders) and cognitive functions. However, there was no evidence about the connection between the neurological improvements and restoration of biochemical parameters of liver. The aim of this study was to evaluate the effect of a new treatment regimen based on the combination of lactulose and choline alfoscerate on biochemical parameters of blood of rats in the conditions of experimental HE and compare it with the standard treatment regimen. In order to obtain HE, animals were injected intraperitoneally with 1 ml/kg of 15% CCl4 in olive oil solution four times a week for 4 weeks. Within 1 month after pathology developing, test groups of rats were treated by the standard and the new scheme. The standard administration regimen contained larnamin once daily (75 mg/kg, intraperitoneally (i/p)), rifaximin (10 mg/kg, intragastically (i/g)) and lactulose (1.5 ml/kg, i/g). In the new scheme animals were treated with lactulose and choline alfoscerate (15 mg/kg, i/p). In rat serum, the concentration of bilirubin, total protein, aspartate aminotransferase activity (AST), alanine aminotransferase (ALT) and alkaline phosphatase (AP) were estimated by standard biochemical methods. Because of the introduction of CCl4 for a month untreated animals have the increased level of bilirubin in the blood serum that exceeded benchmarks by 2.77 times (p<0.05). The concentration of total protein decreased by 31.9% (p<0.05), indicating the intensification of proteolytic processes in the organism. It was revealed the elevation of the enzymatic activity of ALT by 201% (p<0.05), AST by 73.5% (p<0.05) and AP 101% (p<0.05) compared with intact rats under the influence of carbon tetrachloride confirmed the pathological processes in the liver tissue. Contrary, it was shown significant reduction of the bilirubin concentration by 45.9% (p<0.05) in rats injected with choline alfoscerate in the comparison with the untreated control rats. The concentration of protein in the blood of rats under the influence choline alfoscerate increased by 141.3% (p<0.05) compared with rats with hepatic encephalopathy and did not differ from intact control. The level of ALT and AP was similar to such in animals that were on the standard treatment regimen. However, it was found significant impact of choline alfoscerate on the level of activity of AST, which decreased by 36.7% (p<0.05) in comparison with the control group of animals with pathology, and reached the values of intact rats. The results indicate the changes of biochemical parameters in rats with cirrhosis with concomitant hepatic encephalopathy and their restoration to the control values under the influence of choline alfoscerate. The therapeutic effect of a new treatment regimen was similar to a standard; however, there was more pronounced decrease in the concentration of bilirubin and AST activity and increase of total protein under the treatment with choline alfoscerate. 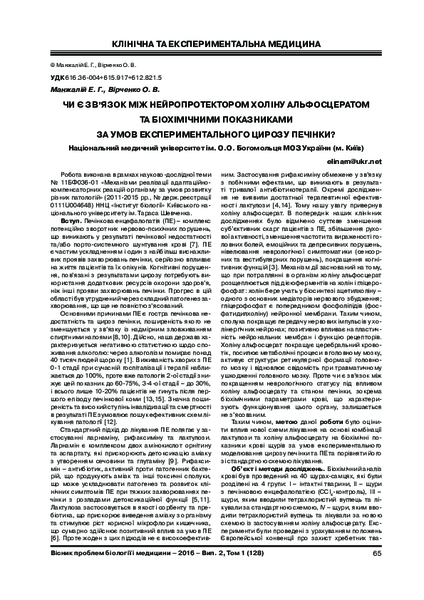