The aim of the study was to examine the frequency and prognostic value of antenatal and genealogical risk factors of bronchopulmonary dysplasia (BPD) and dysplastic dependent pathology (DDP) of bronchopulmonary system in children (BPS). Materials and research methods. Complex of antenatal and genealogical risk factors BPD and DDP of bronchopulmonary system was examined using comparative analysis of their frequency in groups of children (252 − with BPD and 252 − without BPD) with subsequent informativity specification of each factor and their prognostic value in relation to implementation in population-based evaluation of children health level. The personalized analysis of the present factors in 116 children with BPD and 136 with DDP BDS in two administrative regions of Ukraine (SPG1 - first stratified population group) and 252 healthy children (SPG2 - second stratified population group) was performed. The results and discussion. Examination of complication frequency during pregnancy (Х31) revealed that the presence of complications during pregnancy in mothers were significantly more frequent in the group of children with DDP(SPG1), than in comparative group (SPG2), (consequently, (88,9±2,0)% and (50,4±3,1)%, p<0,0001), and among healthy children was significantly higher proportion of those, whose mothers did not have complications during pregnancies(SPG1 – (11,1±2,0)%, and SPG2 – (49,6±3,1)%, p<0.001). The factor (X32), the age of mother at child's birth was also analyzed and determined that children with DDP were born more often in mothers aged under 19 (consequently, SPG1 – (16,3±2,3)%, and SPG2 – (4,4±1,3)%, p<0,01) and older than 40 years (consequently, SPG1 – (3,6±1,2)% and SPG2 – (0,8±0,6)%, p<0,05), however, healthy children were born more often in mothers aged 20÷29 (consequently,SPG1 – (46,4±3,1)% and SPG2– (75,4±2,7)%, p<0,001). The factor (Х33), that is the frequency of previous pregnancies terminations in mother was examined and stated , that children with DDP were born more often in mothers with pregnancy termination in medical history (consequently, SPG1 – (66,3±3,0)%, and – SPG2 (42,1±3,1)%, p<0.001). Presence of dysembryogenesis stigmas (Х34) in children was considered in research, in particular, highly arched palate, arachnodactyly, sandal gap, anomalies of auricles and others. In general, it was determined that the presence at least one of such stigmas reliably and practically can be revealed almost three times often in children with DDP (consequently, SPG1 – (24,3±2,7)%, and SPG2 – (7,5±1,7)%, p<0.001). The comparison groups differed in maternal smoking habit during the starting period (Х35) in medical history, in particular, in the group of children with DDP, the presence of maternal smoking (21.0±2,6)%, and SPG2 – (8,3±1,7)%, p<0.01) was registered. Conclusions 1. The frequency of particular risk factors of bronchopulmonary dysplasia and dysplastic dependent pathology of bronchopulmonary system was investigated and also informative and prognostic values were determined. The greatest significance of such factors as pregnancy complications, mother age at child birth, presence of previous pregnancies terminations were proved. 2. It was determined, that the presence of dysembryogenesis stigmas and also gestosis manifestations in children from previous pregnancies can be informative in relation to DDP formation in case of premature infant birth or infant with low birth weight. 3. The pathometric and sanometric values of examined factors were determined, that will enable in future to include them to the structure of regional programs for BPD and DDP BPS prevention and improve the children health. 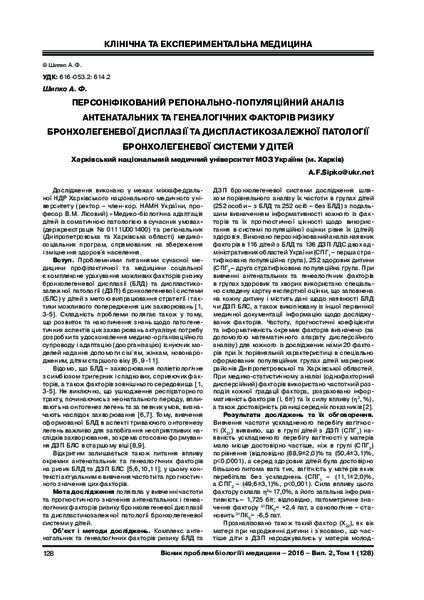