PRINCIPLES OF NON-NARCOTIC ANALGESICS USE IN DENTAL PRACTICE

Non-narcotic analgesics are used primarily in dentistry to moderate pain of various origins and locations. This drugs are well tolerated, combined, not cause of tolerance, are available for outpatient conditions. Pharmacological properties of non-narcotic analgesics are based on the inhibiting of the synthesis of COG-2, reduces the formation of prostaglandins and sensitivity of nerve endings, reducing pain and swelling of tissues. The central analgesic effect is related to their penetration through haematoencephalitic barrier to the hypothalamus. Non-narcotic analgesics are widely used in the course of therapeutic, surgical and orthopedic interventions in the patients with pulpitis, periodontitis, pain after teeth extraction, trauma, alveolitis, perykoronaritis, periostitis, osteomyelitis, neuritis, arthritis, phlegmon, etc. Modern anesthesia based on the using of selective or specific drugs with high analgesic and anti-inflammatory activity and better tolerability, especially in the patients with a problems of gastrointestinal tract. These drugs are meloxicam, celecoxib, parekoxib sodium, aceclofenac which have long-term effect and high analgesic and anti-inflammatory activity. The nonselective analgesics are used if they have a good tolerance. The ketolorak (ketanov) has a most manifest analgesic effect, similar to the power of opiates. Can be used the powerful analgesic diclofenac sodium, ketoprofen, deksketoprofen, lornoksykam. Analginum, indomethacin, phenylbutazone, nimesulide and rofecoxib, which can increase the risk of thrombosis and have a frequent side effects are not widely used. In clinical practice, the using of non-narcotic analgesics should observe the following principles: choice of drug spending in view of the severity of pain; acute pain syndromes – using of a short-term analgesics; for chronic pain – analgesics with prolonged action; should carefully determine the dose and route of administration, duration of therapy; to prevent side effects not prescribe analgesics with severe toxic properties; for potentiation of analgesic effect use auxiliary products (amitryptylyn, mydocalm, carbamazepine, etc.). Thus, the rational using of narcotic analgesics should be based on the principles of evidence-based individualization of choice of drugs, adequate dosage, combination, prevention of side effects, etc. The quality of anesthesia significantly improves the course of disease and improves the effectiveness of treatment. The large amounts of non-narcotic medications at the Ukraine pharmacological market requires the professional competence and responsibility of dentist for the selection of safe and effective pharmacotherapy. 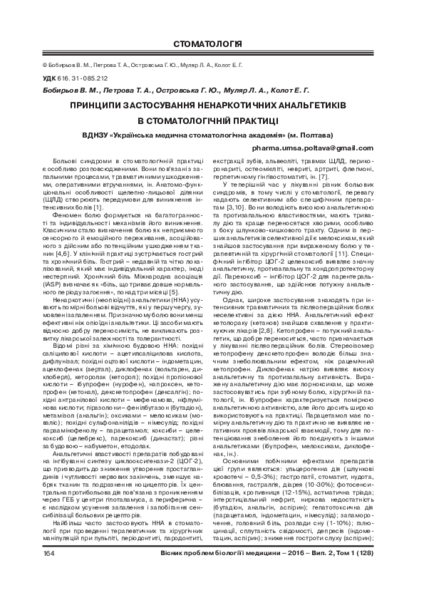