The purpose of writing this article — a brief guide into the evolution of the vertebrate tooth paying attention to the extraordinary importance of the odontology structures in performing of their functions, more ancient and different from the primary mechanical processing of food. It is considered that multifunctionality of the organs of living creatures serves as a main precondition of a transformation of the species in one direction or another. This situation causes interests of consideration of various structures of an organism in the light of evolution. Upon an occasion so important as the question respecting the hard tissue formation: what was the reason that our nature has began to create inorganic structures in organic kingdom so lavishly? Around 600 million years ago there have been numerous groups of animals with a skeleton. Some authors consider that a common feature of supporting tissues appearance in the early Cambrian period was the ability to perform specific functions of a living organism, opening the way to a completely unique way of life. By tracing the modernization of supporting tissues in the process of their development, it is possible to note the following: the skeleton began to serve another purpose — giving mobility to living beings. Due to the joints of insects, probably appeared jaw apparatus. Later, in vertebrates (an axial skeleton, probably, was represented by chord, surrounded by a thick connective tissue membrane), the first solid tissue was represented by teeth located on the surface of the skin. As a result of knitting of aspidin base (intermediate tissue during occurrence of a bone) of these teeth was the formation of the outer shell. Then the bone appeared and skeleton improved by a more progressive way — as an internal skeleton. It follows that, apart from the mobility, vertebrates could vary in their size, weights and constitutional features. Tooth moving from the body to the surface of the mouth helped to create a more perfect jaw apparatus with differentiated tools in processing of food and also to predators as prey finding. These functions are also setting of the skeleton using. However, there is a version, assuming an appearance of the solid parts, consisting of calcium carbonate associated with the change of the salt composition of the pre-existing ocean in which life arose and developed, as well as regulation of that salt composition. Analogy with invertebrates suggests that the mode of phosphorus compounds binding into the solid structure is the same with vertebrate similar to aggregation of calcium with carbon dioxide. Drawing a conclusion: it is more likely that the dental organ became as a reliable, easily accessible storage for the phosphorus-type compounds. Due to the appearance of a tooth, further progress for creation of vertebrate hard tissue on a new basis began, as a result the nature solved several problems at once — preventing the formation of toxic aggregates of phosphorus, making its depot in the body, giving greater mobility and diversity of living things. The prospect of further research is the results the work not only broadens the mind, but also can serve as a prototype in studies of this type or a base for the construction of further reasoning. 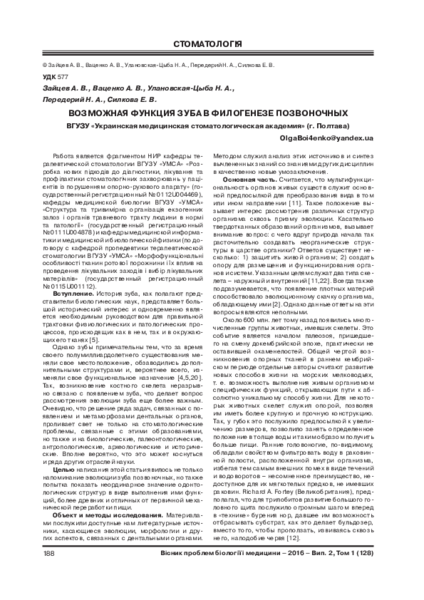