Bulletin of problems biology and medicine / Issue 2 part 1 (128), 2016 / INVOLVEMENT OF INTERLEUKINS IN THE PATHOGENESIS OF PHLEGMONS OF THE MAXILLOFACIAL AREA
Matolych U. D.

Odontogenous purulent inflammation of the soft tissues of the maxillofacial area are a significant number of diseases in maxillofacial surgery. Cytokines belongs fundamental role in the development of inflammation. Among the cytokines that play an important role in coordinating immune responses, an important place is given to interleukin 6, 8, 17 (IL-6, IL-8, IL-17). The aim of this study was to study the cytokine profile in patients with phlegmons of the maxillofacial area. We observed 89 patients with odontogenic phlegmons of the maxillofacial area and 25 relatively healthy individuals. Patients were divided into 3 studied groups: group A included 38 patients with phlegmons, localized to one anatomic site; group B — 35 patients with phlegmons, localized in two or more anatomical sites; group C — 13 patients with phlegmons floor of the mouth. Determining the level of interleukin was conducted with ELISA. Comparative analysis of the studied levels of interleukins found probable differences. In group A probable changes in the level of IL-6 in serum compared to controls were noted (p>0,05). The concentration of IL-6 in group B of 1,2 times the control (p <0,05) and 1,7 times the performance of group A (p<0,01). In group C the level of IL-6 was 2,4 times higher than control (p<0,01), 3,3 times higher than group A (p<0,01), 2 times — group B (p<0,05). This makes interleukin relationship between cells in inflammation, as well as with other fabrics to achieve the most appropriate response and elimination agent. The highest level of IL-8 (more than 12 times compared with the norm) was registered in group C (26,8±0,5pg/ml), which corresponds to the maximum activation of immune cells (primarily monocytes/macrophages) in inflammatory and enables us to predict the severity of the disease. The concentration of IL-8 was significantly higher, not only compared to controls (p<0,01), but with a group A (p<0,01), and group B (p<0,05). Before surgery patients experienced increased concentration of IL-17, indicating that the inflammatory process. In group A the level of IL-17 significantly exceeded the benchmark of 2,6 times (p˂0,05). In group B the concentration of IL-17 significantly exceeded targets by 6 times and 2,4 times the level in group A (p˂0,01). In group C the level of IL-17 significantly exceeded targets by 10 times, 3,8 times higher than in group A and 1,5 times higher than in group B (p˂0,01). IL-17 stimulates the production of IL-6, IL-8, which can lead to increased susceptibility to antigen and not to protect him. Research interleukin levels has important prognostic value for an objective understanding of the immune system of the patient, the development of inflammation. Probably high levels of IL-6, IL-8, IL-17 in patients with phlegmons maxillofacial area indicate the origin of the total immune response. Production of interleukin depends on the severity of inflammation (interleukin maximum concentration observed in patients with phlegmons floor of the mouth). Content options inflammatory interleukins in blood serum were similar, indicating that synerhichnist their effects in the body in phlegmons of the maxillofacial area. 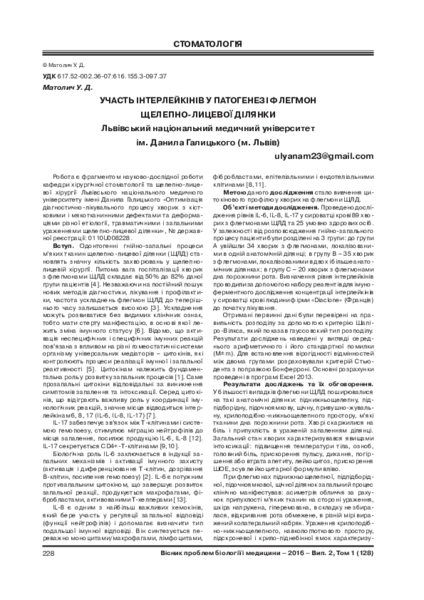