Oral cavity has a multi-component system of protection against pathogenic environmental factors. As it is known, homeostasis of the oral cavity is determined by many factors, but primarily by the functional activity of salivary glands, which determines both the presence/absence of dental pathology and somatic health in general. Saliva, which is the secret of the salivary glands, plays an important role in maintaining the normal state of tissues and organs of the oral cavity. It was established that the quantitative and qualitative alteration of saliva largely determines the stability of dental caries. Saliva provides the dynamic balance of tooth enamel, constancy of its composition due to the ion exchange. Perhaps there is no other organ that could perform so many functions (secretory, excretory, incretory) and had such a significant impact on the organism condition, organs of the oral cavity and digestive system as a whole, as salivary glands have. In addition to participation in digestion, salivary glands play an important role in the formation of local immunity in the oral cavity due to the secretion of immunoglobulin A and also synthesize a number of biologically active substances that are important in the regulation of endocrine functions of the organism. Saliva contains lysozyme – an enzyme that lyses certain bacteria and prevents the multiplication of microbial populations. Cellular factors, that provide a physiological barrier to infection, include lymphocytes, plasma cells, granulocytes, mast cells, macrophages. Thus, saliva rather reflects the functional state of the digestive system of the body and its composition and amount can provide valuable information for clinicians. The interest of researchers to study patterns of salivary gland responses to various stimuli significantly increased in recent years, due to diagnostic value of saliva as a highly informative object for the clinical assessment of the whole organism. Saliva maintains normal functional activity of the oral cavity organs, particularly evident in diseases associated with a reduction in its production – hyposalivation. Creation and excretion of saliva is a complex and multistage process, which involves not only acini cells, but also cells of excretory ducts. Salivation function is controlled by neural and humoral mechanisms. In the last decades the negative impact of environmentally unfavourable factors on the body has increased. Greater salivary glands, which are highly sensitive to the action of physiological and pathogenic factors, undergo specific changes. Salivary gland dysfunction can be caused by various reasons. As a result of the research it was revealed that the study of morphological changes of the greater salivary glands in iodine deficiency conditions, hypothyroidism remains understudied and debatable problem of Morphology, Endocrinology, Stomatology and Therapy. Today there is no work, which would have studied the morphology of greater salivary glands in iodine deficiency conditions, hypothyroidism, while they are known to be the one of the organs-depot of iodine and their functioning depends on the metabolic processes in the organism, which in turn, are determined by the level of iodine-containing thyroid hormones. As it is known, the structure and functioning of greater salivary glands depends on the metabolic processes in the body and, of course, on the level of thyroid hormones; in addition, their secret – saliva determines the state of the teeth-jaw system and affects digestion. However, according to the literature data, the morphology of the salivary glands in conditions of iodine deficiency and hypothyroidism has not been studied. 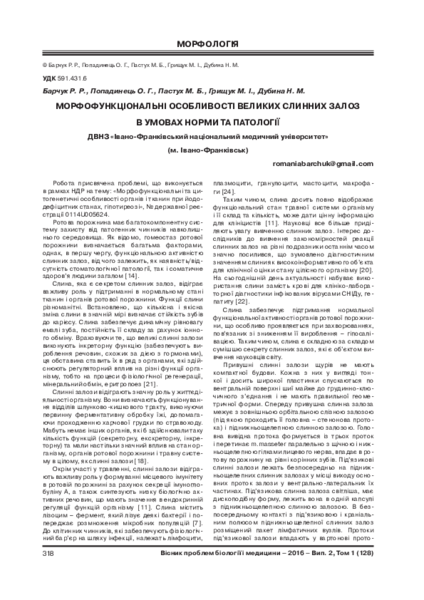