Among the systemic diseases that are common in dental practice, diabetes leads for its annual spread and growth. Years of research diabetes relationship and diseases of the salivary glands showed that insulin deficiency affects directly and indirectly on the structure and function of salivary glands. For a long time researchers did not attach due importance to the manifestation of diabetes in the mouth — dryness (xerostomia). Traditionally, herbal medicines are used as an auxiliary hypoglycohaemic means. Herbal remedies are not an alternative of the using of hypoglycohaemic drugs. But herbal medicines can act as a preventive means and be an essential support for standard method of treatment for all stages of his disease. Among the most popular herbal preparations today there are preparations of Vaccínium myrtíllus, Viburnum opulus and Juglans nigra. But there are no studies that have described the comparative hypoglycemic effect of these plants and there organic tread on sublingual salivary glands. The aim. Comparative study of hypoglycemic effect and organic tread of decoction of the leaves of bilberry (Vaccínium myrtíllus), juice of red viburnum (Viburnum opulus) and tincture of black walnut (Juglans nigra) on the sublingual salivary glands of rats with experimental dexamethasone diabetes type 2. Materials and methods. All experimental animals were divided into 5 groups: 1 — intact, 2 — rats with simulated diabetes, 3 — rats with preventive herbal remedies in the form of a decoction of the leaves blowberry (2 ml dilution 1:10), 4 — prevention of diabetes with juice of red viburnum, 5 — prevention of diabetes with tincture of black walnut. There were 50 rats, 10 animals in each group. Animals of 2, 3, 4 and 5th groups were administered by dexamethasone intradermally in a dose of 0,125 mg/kg body weight for 14 days to play for violations of glucose tolerance. Injection of herbal medicine began with the first day of the experiment. The animals were taken out of the experiment by decapitation under light ether anesthesia. For biochemical research blood was taken from the abdominal cavity. The resulting tissue sections were stained with hematoxylin-eosin, according to Van Gison (for coloring connective tissue), Sudan( coloring lipids). Results. Biochemical studies showed that we were able to create a model of experimental diabetes. In experimental diabetes rats tissues were marked increasing in the volume of acini by the cells cytoplasm. We observed markedly increased connective tissue in the capsule gland and its stroma, large lipid droplets in the stroma as well as directly in the secretory cells of acini. We have not seen lipid droplets in ducts. Salivary glands tissues of animals, whom as a prophylactic agent was used a decoction of the bilberry leaves, were significantly different from the tissues of the pathology. We observed the decreased volume of acini by reducing the cytoplasm, increased lumen of acini. Connective tissue was observed around the vessels, but their number was small, significantly reduced the layer of connective tissue that formed the capsule gland. Lipid droplets were in stroma and acini, but their number and sizes were smaller than in the group with experimental diabetes. There were a little of saliva in the ducts. During the prevention of diabetes by the tincture of black walnut we also observed the positive changes, but they were not expressed as strongly as during the bilberry protection. Compared with salivary gland tissue without correction acini were not edema we observed saliiva (secret) in the lumen of acini and small single lipid droplets were uneven, there were more in the stroma. Hypoglycemic effect of red viburnum juice was good, but we did not see positive changes in the tissue of salivary gland. Increasing the volume of acini resulted to a reduction of their lumen, there were no secret in the ducts. We saw a lot of connective tissue, especially in stroma, large lipid droplets, which were located in the secretory part of the stroma. Conclusions. Experimental diabetes leads to hyperglycemia and tissue degenerative changes in the subligual gland. The hypoglycemic effect of decoction of the leaves of bilberry, juice of red Viburnum and the tincture of black walnut was good. 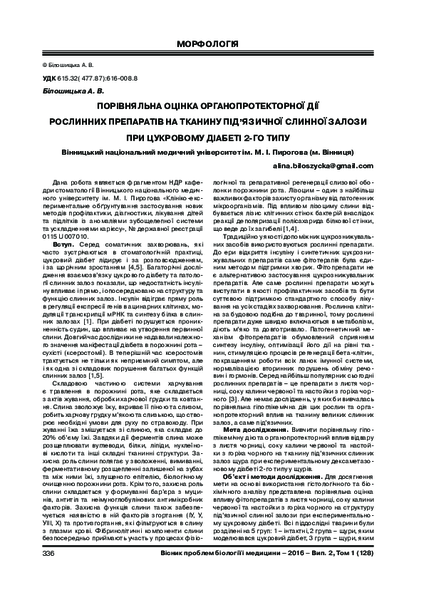