The main tendencies of formation of science and educational discipline of human ecology in the World and Ukraine are analyzed and summarized. The term “human ecology” is known from 1921 as found in the writings of American researchers R. Park and others. Here the need to distinguish human ecology into a separate scientific field and discipline from 1936 was declared. Initially, it was defined within the framework of the methodology of system analysis that is used traditionally for the ecology of plants and animals. Later on, the methods of sociologists were introduced. They integrated various spectra of disciplines that introduced wider points of view on this science. The first interdisciplinary journal appeared in 1972 and it has outlined the topics of human ecology. Hereby is presented author’s definition of the science, the object and subject of human ecology are formulated, as well as their main tasks are stated. A brief historical review of the stages of the formation of this science and its main aspects were also made. Different approaches to the content of the discipline are show, with particular attention to the bio-social essence of the person. After all, virtually all environmental factors of the bio-geosphere environment have a greater or a lesser impact on biotic human and social human in the first place. The pioneering position of H.-G. Reckeveg – the founder of homotoxicology was discussed here. The scientists divide the factors that affect human health into five groups. They usually act on the body in a complex way, with the effects of synergy or antagonism. However, their systemic role must be monitored from the moment and conditions of the conception of a new organism. It is shown that the consortium ecosystem of a person, as a biotic being, begins to be formed even in the womb by intra-ecosystem factors: the internal environment of the body’s system of the mother. Ignoring the complexity of the mutual coexistence of our organism, its internal and external obligatory or optional, saprotrophic or parasitic consortia – such as bacteria, fungi, viruses, worms and even some invertebrates – is very dangerous for the organism. The questions of biology and ecology of human parasites are developed much deeper than in the young science of ecology due to the rapid development of medical parasitology. Ecoparasitology is a science about the biology of development, the ways of spreading parasites in nature, the habitats and conditions of their existence. It has developed in the recent years. Somewhat narrowed scope of its research, however, is based on the systematic vision of a person (its organism) as the nucleus of a consortium heterotrophic ecosystem. Parasites are given more attention because of their danger to human health. However, symbionts and other organisms are also present in any organism at the same time as parasites. Symbiocenosis is called the whole consortium together with the host organism. Viruses, rickettsia, spirochetes, bacteria, mushrooms, protozoa, helminths, arthropods, etc. are components of the symbiocenosis. The conclusion of the work is that the consortium ecosystem of man – an anthropo-ecosystem – is a naturally or purposefully associated set of the living organisms, together with the human body, as well as the internal and external environments that they create together. 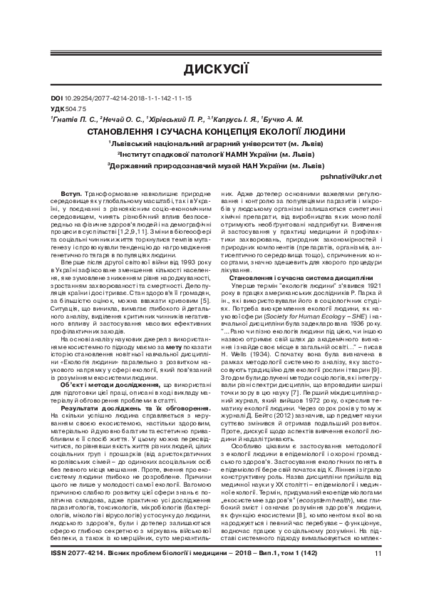