THE mRNA EXPRESSION CHARACTER OF HIF-1αAND HIF-3α, NITROTYROSINE, сGMP AND INTERLEUKINS IN THE MONGOLIAN GERBILS BRAIN WITH ACUTE ISCHEMIA DURING THE GLUTATHIONE SYSTEM MODULATORS THERAPY

The growth and spread of ischemic brain lesions among people around the world continues to grow steadily, in spite of the progress made in modern neuropharmacology. Under these circumstances an important aspect in the treatment of cerebral stroke becomes the pharmacological regulation of the molecular and biochemical mechanisms of endogenous neuroprotection. The important directions of modern neuroprotection are: increasing the resistance of the nervous tissue to hypoxia, reducing the local inflammatory response and limiting the reactions of nitrosative stress. The aim of our studywas to investigate the effect of glutathione system modulators- selenase, glutoxim and glutaredoxin – on the mRNA expression character of HIF-1αand HIF-3α, markers of nitrosative stress and interleukins in the Mongolian gerbils brain with acute ischemia. Object and methods.The experimental part was conducted on 60 male Mongolian gerbils (Meriones unguiculatus) weighing between 60 and 80 g. In accordance to the research program, an irreversible one-way ligation of the common carotid artery was utilized, which presently is generally accepted as an experimental model of acute cerebral circulatory disorders. To study the effect of experimental drugs they were administered intraperitoneally one time daily for 4 days, starting from the first ones, after recovery from anesthesia. Comparison drug and physiological solution (control group) were administered in the same way. Efficiency of glutathione system modulators (selenase – 50 µg/kg, glutoxim – 50 mg/kg, glutaredoxin – 200 µl/kg) and comparison drug (pyracetam – 500 mg/ kg) evaluated by their influences on the mRNA expression state of HIF-1α andHIF-3α, real-time reverse transcription polymerase chain reaction (RT-PCR) in brain tissue was used. The nitrotyrosine, TNF-α, IL-4, IL-1β, cGMP levels was determined by ELISA in brain tissue. The results of the study were processed using a statistical package of the licensed programs «STATISTICA for Windows 6.1» (StatSoft Inc.), «SPSS 16.0», «Microsoft Excel 2003». Results.It has been established that the cerebral ischemia modeling leads to a significant increase mRNA expression of HIF-1αand insignificant mRNA expression of HIF-3αon the 4th day of model pathology in brain tissue. The course injection of the study drugs within 4 days after the experimental ischemia leads to a significant increase in the expression of HIF-1α, leading in this series glutoxim (37 times higher than the control group) ˃selenase (20 times higher control) ˃pyratsetam (17 times higher control) ˃glutaredoxin (15 times higher control). This increase in HIF-1αexpression increases the neuron’s resistance to hypoxia. It should be noted that injections of glutaredoxin resulted in an increase in mRNA of HIF-3αexpression relative to control values, and selenase and glutoxim did not significantly change the expression of this gene. The results of these studies show that compared with the sharm operated animals, the group of gerbils with stroke showed significant increase of nitrotyrosine, TNF-α, IL-1β, levels and a decrease in IL-4 cGMP levels. A course of treatment with selenase, glutoxim and gutaredoxin increase of IL-4 level and decrease nitrotyrosine, TNF-αand cGMP levels. The results confirm the presence of neuroprotective properties in selenase, glutoxim and glutaredoxin. These properties were identified by their ability to restore the thiol-disulfide balance, to raise the level of IL-4 and the expression of HIFs and reduce the high levels of nitrotyrosine and pro-inflammatory interleukins in ischemic brain injury, resulting in the reduction of neuronal loss following a stroke. Conclusion.The obtained data are experimental justification for the use of selenase, glutoxim and glutaredoxin in the complex therapy of cerebral ischemia. 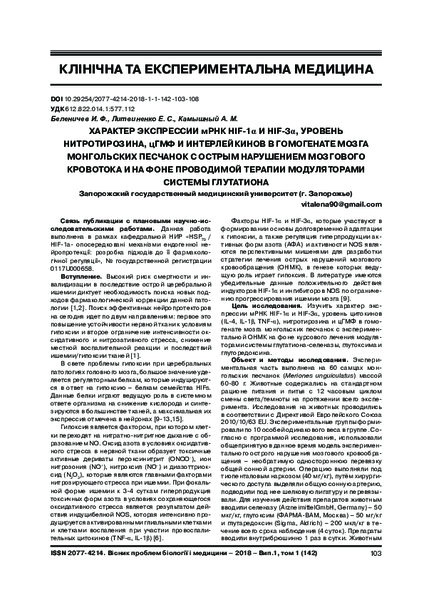