In the pathogenesis of central nervous system involvement, autoantibodies (AATs) play an important role in neuro-specific proteins (NSCs), which themselves can become damaging factors (autoimmune conditions). Determination of their level in metabolic diseases can be an objective criterion of the state of the central nervous system and even an early diagnostic criterion. The purpose of the work: to investigate the functional activity of B-lymphocytes and the development of humoral neuro-autoimmune responses in peripheral blood of patients with non-neuropathic forms of lysosomal storage diseases (LSD). Object and methods.The 7 patients with non neuropathic forms of LSD were examined. The comparison groups consisted of the 7 healthy children (group 1) and the 7 children with cerebral palsy in the form of spastic tetraparesis (group 2) aged up 7 to 15 years (13.4±0.34). In the blood of children of all groups, the number of B-lymphocytes was determined, their proliferative activity, the number of circulating immune complexes (CIC), the level of AAB to NSP (OBM, S100, NSE) by the immune enzyme method. For statistical processing of the obtained data, methods of variation statistics were used. The normal distribution of data was checked according to Shapiro-Wilkie’s criterion. For a multiple intergroup comparison of averages, non-parametric random discriminant analysis of CrackelWallis was used, followed by the use of pairwise comparison of groups in the Dialectic of Crackel-Wallis test in STATISTICA 6.1, which is equivalent to a multiple comparison using the U-Mann-Whitney Criterion. Implementation of the Holm-Bonferroni procedure is performed by means of MS Excel 2007. Averaged values were represented as M (25%; 75%) (n), where M – median; (.) Is an interquartile range. Statistical analysis and graphical representation of the results were performed using the STATISTICA 6.1 software package (StatSoft Inc., http: //www.statsoft.ru. Results.According to the data of the intergroup comparative analysis, the tendency to reveal statistically significant differences in the following indices of immunological status in patients with non-neuropathic form in relation to healthy children in the U-Mann-Whitney criterion: an increase in the number of B-lymphocytes in peripheral blood (p = 0.02); growth of proliferative activity of B – lymphocytes in comparison with gr. № 1 (p = 0,007) and gr. № 2 (p = 0,009). The number of CEC statistically significantly differs only in comparison with the gr. No. 1 (p = 0.01). The level of AAB to OBM was not statistically significantly different. A statistically significant increase in the titre of AAB to S-100 protein was found in patients with non-neuropathic forms in relatively healthy children with 3.89 (3.6, 5.48). to 9.8 (8.3; 12.9) cu, that is, 2.5 times (criterion U-Mann-Whitney, p = 0.0002). At the same time, the tendency to identify significant differences (U-Mann-Whitney, p = 0.05) was observed in the comparison group number 2 (children with cerebral palsy), with regard to patients with non-neuropathic form, but given the Holm-Bonferroni amendment, these data are statistically insignificant. The level of AAB to NSE is statistically significantly elevated in patients with a non-neuropathic form in relatively healthy children (U-MannWhitney, p = 0.0003), and in relation to patients with cerebral palsy, there is a tendency to detect significant differences (U-Mann-Whitney Criterion; p = 0.04), however, taking into account the Holm-Bonferron amendment, this result was statistically insignificant. At the same time, no significant differences were found between the comparison groups itself, as well as for the previous parameters of the immunological status of patients. Conclusions.According to the data of the intergroup comparative analysis using pairwise comparison of the groups in the Dialectic of Crackel-Wallis test in STATISTICA 6.1, which is equivalent to the multiple comparison using the U-Mann-Whitney criterion, taking into account the Holm-Bonferroni correction, statistically significant differences were found in patients with non-neuropathic LSD forms from the groups of comparison of all indices of humoral immunity that were studied, except for the level of AAB to OBM. This can indicate the predominance of the processes of cellular damage over demyelination. Increased proliferative activity of B-lymphocytes, apparently, is directed at the production of autoantibodies to NSP and determines the features of the level of antibody formation to neuronal and glial antigens. The detected statistically significant increase in the level of AAB to NSP allows to assess the degree of damage to the nervous system and may be an early diagnostic criterion for the manifestation of the disease. 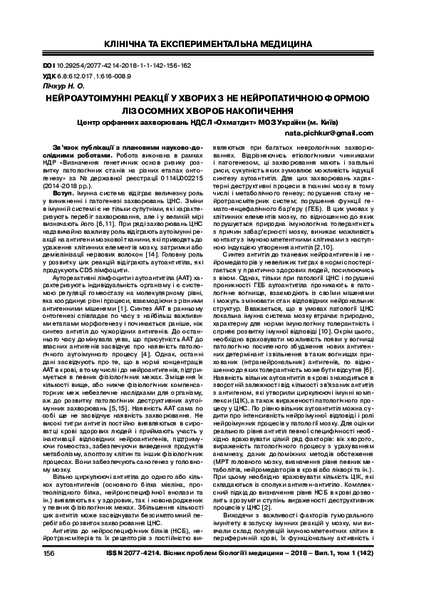