Bulletin of problems biology and medicine / Issue 1 Part 1 (142), 2018 / IMPROVEMENT OF ENDOGENOUS INTOXICATION AND MORPHO-FUNCTIONAL CHANGES OF THE LIVER IN PATIENTS WITH ACUTE SMALL INTESTINAL OBSTRUCTION AND IN THE EXPERIMENT
Skrypko V. D.

Endogenous intoxication (EI) as a systemic process involving a significant variety of metabolic homeostasis disorders is a pathogenetic basis of complications and multiple organ failure in case of small intestinal obstruction (ASIO) which inhibits homeostasis auto regulation mechanisms to fatal level. The leading role in EI occurrence in case of ASIO belongs to enteral insufficiency as a result of deep hypoxia and energy supply disturbance with the development of destructive changes in the intestinal wall. 202 patients with acute small intestinal obstruction (ASIO) underwent in-patient treatment in Ivano-Frankivsk Central City Clinical Hospital. The results of their examination were analyzed. The indices of endogenous intoxication, namely, the relation between the level of lipid peroxidation (LP), middle mass molecules (MMM) and their effect on morpho-functional changes of the liver were studied. Significant increase in LP products, MMM, and decrease in ceruloplasmin (CP) content were observed in case of ASIO as well as significant changes in the liver with deterioration of granular endoplasmic reticulum and smooth (agranular) endoplasmic reticulum, mitochondria, and hepatocytes nuclei. All the patients were divided into two groups depending on the treatment. Group I consisted of 100 patients with ASIO who underwent comprehensive treatment according to the generally accepted regimen in accordance with the recommendations of the Ministry of Health of Ukraine dated 02.04.2010 № 297 (“Standards of medical care for patients with emergency surgical diseases of the abdominal cavity”). Group II included 102 patients with ASIO who were treated according to our proposed comprehensive treatment which included the determination of intestine resection extent according to the point scale developed by us and additional application of anti hypoxant-antioxidant therapy in the treatment regimen, namely megluminesodium succinate (Reamberin, Polisan) in addition to the generally accepted treatment with amber acid as its main active ingredient. The drug was administered intravenously by drop infusion in a dose of 400 ml per day. The rate of administration did not exceed 90 drops per minute. The drug administration was started in the complex preoperative preparation as well as immediately after the completion of surgical treatment in the resuscitation department. The course of the treatment lasted 7 days. An experimental study was conducted on 40 animals (swine of Vietnamese breeds, at the age of 3-4 months, weighing 15-20 kg, at the premises of I. Horbachevsky Ternopil State Medical University according to cooperation agreement) in order to study comprehensively morpho-functional changes in the liver and small intestine in the dynamics of ASIO development. The reason for animals’ selection was that the swine’s small intestine was most suitable for surgical diseases simulation and the obtained data could be extrapolated to a person to some extent. ASIO was simulated according to A.S. Shalimov (1989). Pathohistological and electron microscopical study of liver cells was performed in the experiment. Statistical processing of the results was conducted with the use of standard program package “Statistica 6.0 for Windows”. A database was created on the basis of the obtained data. It included both parametric and non-parametric criteria for the assessment of the patient’s condition. Arithmetical mean (M) and its statistical error (m) were used to describe variables with normal distribution. The description of the variables with the distribution different from the normal one was conducted with the use of median (Me), the lower and upper quartiles. The appointment of antihypoxant-antioxidant therapy in the postoperative period was proved to contribute to reparative processes in hepatocytes, to lead to the normalization of endogenous intoxication indices in blood serum and to reduce postoperative mortality. Recommendations were developed and the efficiency of inclusion of the drug with detoxication, antihypoxact and hepatoprotective action (megluminesodium succinate in a dose of 400 ml once a day during 7 days) in comprehensive treatment of ASIO was proved. 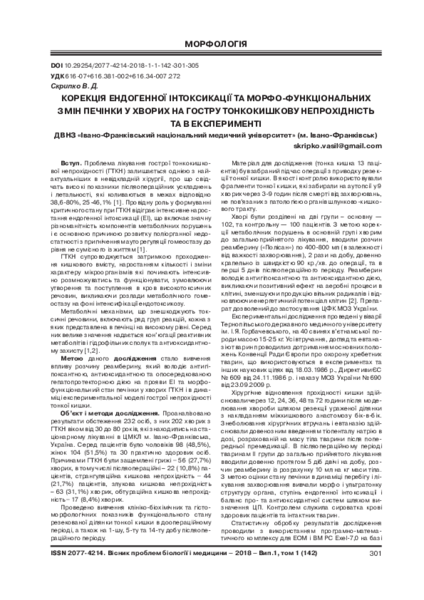