Bulletin of problems biology and medicine / Issue 1 Part 1 (142), 2018 / ANALYSIS OF MORPHOLOGICAL CHANGES OF SKIN IN THE OVER THE IMPLANTATE AREA OF SUTURE MATERIAL, APPLICABLE IN AESTHETIC MEDICINE, IN NECROPTATES OF DIFFERENT PERIODS
Turkevych M., Turkevych A.


ANALYSIS OF MORPHOLOGICAL CHANGES OF SKIN IN THE OVER THE IMPLANTATE AREA OF SUTURE MATERIAL, APPLICABLE IN AESTHETIC MEDICINE, IN NECROPTATES OF DIFFERENT PERIODS

Aim: to establish the reliability of the effectiveness of collagenogenesis due to the introduction of implants –resorbing and permanent, based on the study of pathomorphological changes in the skin. The object and methods of research. The research was carried out on 300 sexually mature white male rats of the “Vistar” line weighing 100-130 g. Experimental animals are divided into 5 groups depending on the type of implanted threads. Rats of all groups (14, 30, 90, 180, 365 and 540 days) were divided into 5 subgroups of 10 individuals. All 10 rats of each subgroup were implanted with the same type of suture material. The following Aptos threads were used: Excellence Visage, Nano Spring, Aptos Spring, Light Lift Thread and Light Lift Spring. For statistical research, two basic parameters were chosen for each sign – the frequency with which the sign occurs in the group, and the intensity of manifestations of this trait. The level of reliability is set at p <0,05. Results.Statistical reliability was established between the groups of the subjects according to the indicators of infiltration, collagenization, and stimulation of the formation and degradation of fibroblasts. Conclusions 1. At different chronological stages of the morphological study of the perimplant site, collagen with different term of biodegradation and in different amounts is formed. 2. Depending on the type of implantation thread (chemical composition and structure), collagenogenesis is stimulated differently, the intensity of collagen formation is largely influenced by the degree of tissue trauma associated with the relief and the shape of the thread, as well as the presence of polylactic acid. 3. Particular attention deserves a permanent polypropylene filament-spring AS, which does not contain polylactic acid, but due to its structure stimulates collagenogenesis to a large extent. 4. Infiltration in the perimplant site was progressively reduced in all groups of experimental rats, at all chronological stages, which is a statistically significant sign. 5. The best results showed cosmetic threads that were in the form of springs or threads with notches in combination with polylactic acid (LLT, LLS, AS) –the degree of collagen on the 540 day of the study remained high (p <0,05). 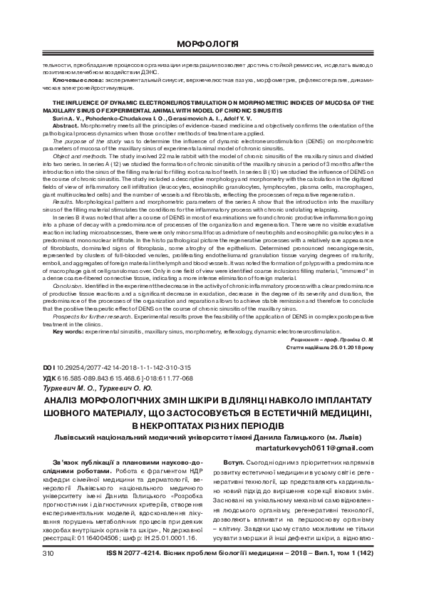